One of the biggest highlights of Thiagrajan Kumararaja’s Super Deluxe, is how it gleefully borrows moments from mainstream potboilers to make a larger point. And this is most apparent and effective inside a police station, where a transwoman named Shilpa (played by Vijay Sethupathi) is brazenly propositioned and inappropriately touched (more than once). Practically begging for help to find her lost son, Shilpa is repeatedly subjected to lewd remarks. Director Kumararaja doesn’t let the audience off the hook too easily, as he stretches the misery to the point that the audience is shifting uncomfortably in their seat. And then… we get the payoff. 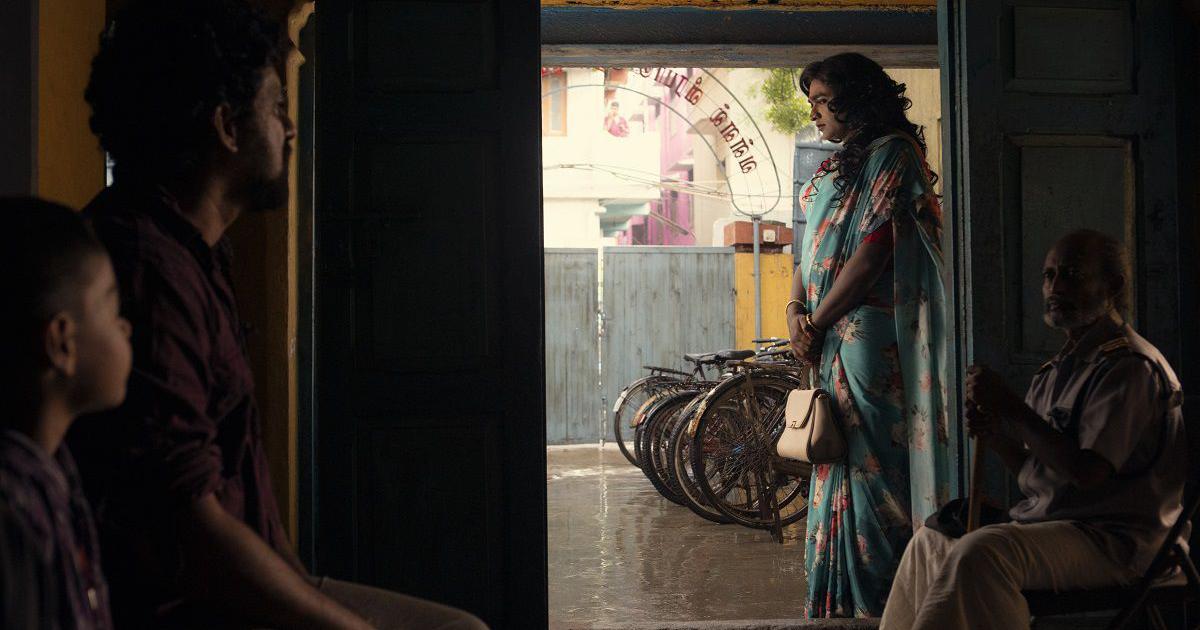 Sethupathi’s Shilpa abandons her soft-spoken ways to reach for her predator’s uniform collar. Held back by four subordinates, Shilpa growls the choicest of swear words while making every effort to reach for the officer. It’s a moment directly reminiscent of Rajkumar Santoshi’s Ghatak, where Sunny Deol’s character is held on a leash by the villain’s seven brothers, as the villain humiliates Deol’s father in broad daylight. It’s a terrific scene where Deol can be seen *nearly* out-muscling ALL the henchmen, that has been mirrored in countless mainstream films to depict the hero’s unabashed masculine strength. And yet, when this moment is recreated in Super Deluxe, we’re made privy to both Shilpa’s vulnerability and her pure, molten rage. The director raises a question mark of whether masculinity equates to heroism. It’s a spectacular moment, that would befit any ‘action hero’ like Sunny Deol, Sunil Shetty, Ranveer Singh, Mahesh Babu or even Surya. But Vijay Sethupathi plays it in a way that we arrive at the pent-up anger, only after the officer strips Shilpa off her wig.

After the corrupt cop denies the character her femininity, is when we see the fury in Sethupathi’s eyes. What many believe will end with another leading man’s ‘action routine’, concludes with another mainstream cinema’s famous plot-device, the transperson’s curse. In this case, Shilpa slaps the cop’s forehead, wishing death upon him.

Vijay Sethupathi’s Shilpa has the most interesting storyline in Super Deluxe. A young boy awaits his father’s return, so that he can show him off to his classmates, who bully him by referring to him as a ‘test-tube baby’. A wife longs for her husband’s touch, his companionship. That feeling of a ‘complete family’ she sees so often, in the soap operas. So understandably when the man turns up as a woman, both the son and his mother are too stunned to react. Her husband asks if he can borrow a saree, and she watches in stunned silence as he dresses. Any male actor taking on the role of a transwoman can easily turn it into a gimmick, but Vijay Sethupathi’s conviction shows up in the way he dresses Shilpa up. Perfecting the pleats of her sari and tucking it in, Shilpa leaves her wife stupefied. It’s a wordless scene, where an Ilaiyaraaja song fills the silence.

Kumararaja wished to depict the relentless indignity meted out to transpersons on an everyday basis. Hence, Shilpa spends the day being referred to as ‘it’. She isn’t allowed into her son’s school premises, she gets catcalled on the streets and later, humiliated in the police station. In spite of all this, Shilpa tries explaining to her son the odd circumstances surrounding their family. “How sometimes we wear the wrong shoe on the wrong foot, similarly God accidentally put me in a man’s body,” Shilpa tells her son. She also shares with him some of the bitter truths about life, “Never try to be different. Society fears what it doesn’t understand.”

Sethupathi’s performance as Shilpa is as assured as they come, and it leaves no doubt that he’s one of the most exciting actors in the country. Breaking out with Karthik Subbaraj’s Pizza (2012), what Sethupathi has achieved in six years is nothing short of stupendous. His performance as Shilpa will not only be remembered as one of his career’s best, but also for appearing in a film as ambitious as Super Deluxe. Without Thiagarajan Kumararaja’s film and Vijay Sethupathi’s performance, the world would be a less magical place.