It’s no surprise that filmmaker Rima Das cites Satyajit Ray’s Pather Panchali as one of the major reasons for delving into filmmaking. In her second feature film, Village Rockstars, Das gives a solid homage to Ray’s seminal 1955 film. Here she follows around a group of kids in a nearly-always submerged village in Assam. As the opening shot of Village Rockstars suggests, Das gets up close and personal with the kids, observing them through the tall blades of grass and just allowing them to be.

Blurring the lines between film and documentary, Das’s camera follows these kids through their many leisurely afternoons – climbing trees for betel nuts, napping in paddy fields, going to school, and playing with their family goat. It’s intimate storytelling where the audience gets sucked into the film’s rich setting, and that becomes their ONLY reality inside the theatre. 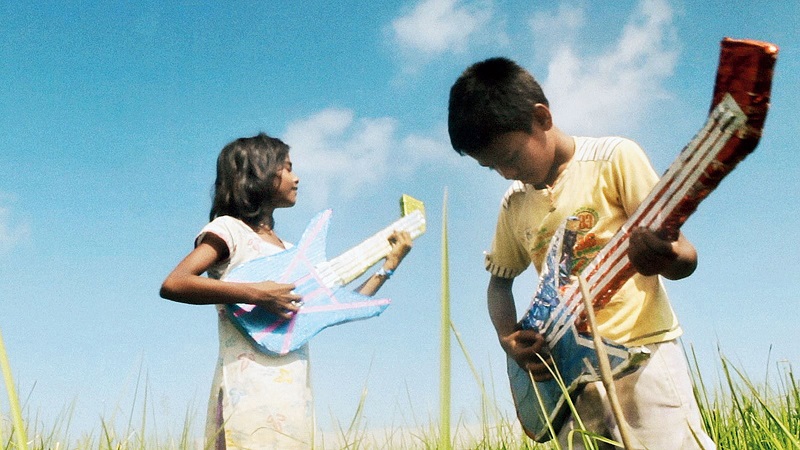 10-year-old Dhunu (played by Bhanita Das) spends a lot of her day climbing trees, as if she were plotting her course to the stars. Her’s is the age of naive optimism where after being enthralled by a ‘performance’ of children with instruments made out of thermocol, Dhunu asks her mother (played by a brilliant Basanti Das) if they have money to buy an actual guitar. There are days Dhunu and her family eats rice with salt because curry might be not be affordable, but that won’t deter her from hoping against hope.

Dhunu is fascinated by comic books, which illustrate the stories of ‘bands’ who end up winning the gold medal in spite of life’s many roadblocks. She confides in her friend, Bolo, that she will be getting a guitar soon. ‘How?’, he asks half asleep and Dhunu responds by saying that a newspaper told her that if she wanted something badly enough, then the universe would present it to her. This is the age of fairy tales, isn’t it? 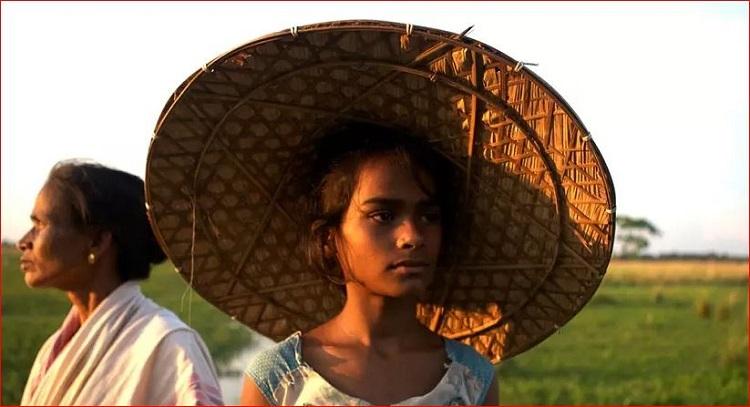 Shooting in a village that is routinely subjected to disappearing bridges due to the rising water levels, Das uses the flood as a recurring motif to depict the everyday hardships of the locals. Dhunu’s mother teaches her to swim and instills in her that ‘courage’ is all you need to make it to the shore. It’s the flood that took away Dhunu’s father, leaving her mother with the responsibility to perform the roles of both parents. While navigating through their paddy fields ravaged by floods, Dhunu asks her mother why she puts in all that effort to plant crops only to see it destroyed, year after year? “Karma is dharma, hard work is all we have…” – her mother says. It is her mother’s silent support that keeps Dhunu’s world of limitless possibilities in orbit, and yet sometimes it isn’t enough.

Having been advised by an elder of the village to start ‘working’ towards her dream of buying a guitar, Dhunu accumulates some money which she then hands over to her mother, which leads to another interesting moment in the film. The proud mother asks her daughter if she wasn’t taking good care of her, that she would have to go out and work for others. “Don’t work for others,” Dhunu’s mother instructs her, quietly telling her that she’s destined for greater things.

Das’s film also documents Dhunu’s journey into puberty, where the ladies of the village drag her back home after she gets her first period. Dhunu’s friends (all of them boys) are instructed to stay away, while her mother is reminded of all the rituals that need to follow. Dhunu is told she can’t be roaming around with boys anymore, because she’s a ‘woman’ now. She nods sheepishly, only to defy them in the very next scene where we once again find her on top of a tree, reaching for the stars.

Rima Das’s Village Rockstars is a film about infinite hope. It is about swimming against the tide, drowning a few times, but still making it to the shore. Dhunu’s mother understands this and that’s why when she finally sees Dhunu swimming like the other ‘boys’ of the village, it’s easy to spot the pride in her eyes. Her daughter has come off age, and she won’t stop pursuing her seemingly ‘impossible dreams’ until she reaches the shore.