Diljit Dosanjh debuted in Bollywood with Abhishek Chaubey’s Udta Punjab. A big Punjabi star, Diljit successfully established himself as a great performer in the film despite having Bollywood biggies like Kareena Kapoor Khan, Alia Bhatt and Shahid Kapoor in it. His next with Anushka Sharma, Phillauri got mixed reviews, but Diljit’s performance was appreciated.

The actor’s next Bollywood project is not confirmed yet but he’s next release is a Punjabi film, titled Super Singh. Also featuring Sonam Bajwa, the film is about a common man discovering his supernatural powers and then how he goes on to be the saviour of the world is what comprise the story. But, does Diljit Dosanjh himself believe in such superheroes? What is his take on doing a film of the genre which is not very well received in India? How does he react to this new stardom he has built for himself? InUth caught up with Diljit in Delhi and Sonam in an interview recently. Here are the excerpts:

Diljit, how do you react to the comment when people tell you your film, Super Singh is a combination of Krrish and Flying Jatt?
I am very happy that people were comparing a Punjabi film with a Bollywood film like this, before the trailer. People liked the trailer. I believe they would like the film even more. For me, the fact that it’s a superhero film is fine, but its story is what makes it more appealing. The family will enjoy this film, especially the kids and the youth.

Also read: Diljit Dosanjh confesses his love for Kardashian half sister, Kylie Jenner, and it’s too cute to miss 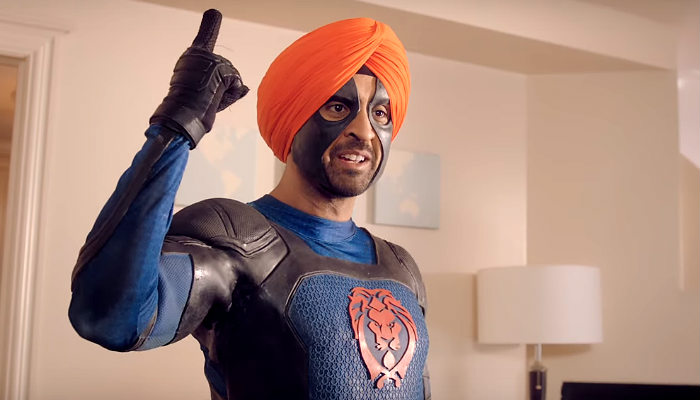 Not many superhero films are made and not many get popular like that, right? How confident are you and why are you confident?
Sonam: I don’t know about others but the script of this film made a lot of sense to me. It’s not a typical super-hero film. There is a lot more in the film just than the action and showing the super powers.

To Sonam: Don’t you have apprehensions when you look at a film and it’s a superhero film? What is there for an actress to do? Usually, that’s what it happens, right?
Diljit: You’ll look at the movie and realise that it’s not just a superhero film. It’s also a story of a guy and a girl. Yes, since the main character is Super Hero that’s why the name of the film is also Super Singh. But, it has a love story in its heart.

Sonam, I am sure a lot of people ask you when are you venturing into Bollywood, I want to ask you what kind of work would you want to do in Bollywood considering there are a lot of stereotypes built around Punjabi women in films, that they are loud and all out there. How would you like to break that stereotype?
I don’t have anything specific in mind, I believe in doing good work. When you hear a script, you like it and you know you are working with a good set of people, you just end up doing it.

To Diljit: When people tell you that you are that icon who has merged the boundaries of regional cinema and Hindi cinema, how do you see that? Why do you think people love you this much? They just don’t see you as a regional star anymore.
If you see my Twitter account, it still says ‘regional artist.’ I am a proud regional actor. Everything I have is because of Punjabi cinema. I don’t want stardom to hit me. I am more excited and happy when my Punjabi film is releasing. I am myself a Punjabi and Punjabi-ness is in my blood. I am an artist, you can make me work wherever you want to, Punjab, Mumbai, or Canada, doesn’t matter. I think it just the matter of a few screens. I give my 100%, I don’t care even if nobody is listening to my song outside Punjab, I make sure my job is done.

What kind of work interest you, Diljit?
Anything I like, I do. I am not hungry for any kind of work.

Neither ambitious nor passionate about work?
No, I am not. If it comes, it’s fine. If it doesn’t, I am fine then as well. I don’t think that if my work makes a lot of difference, everybody is doing good work around. If I get it too, I’ll also do it. It’s all by God’s grace. All that I won’t quit is doing hard work.