Lately, Kangana Ranaut hasn’t been saying amazing things about her Rangoon co-star Shahid Kapoor. On a promotional spree, the diva has said things like how difficult it was to share a cottage with Shahid or the ordeal she faced while filming intimate scenes. But, now the 29-year-old diva has gone a step ahead and compared Shahid with Hrithik Roshan. We all know how Kangana Ranaut and Hrithik Roshan are at loggerheads since last year.

So what led to Kangana speaking about Shahid and Hrithik in the same sentence? Here’ s the answer to this.

Those who have been closely following Kangana’s statements would know she said recently that it was a nightmare living with Shahid. When the Sasha of Bollywood was asked to comment on this, he said Kangana made up things in her head. The Udta Punjab actor told a daily, I have to tell you that Kangana makes up things in her head. She has a vivid imagination. I don’t remember telling her all this at all. 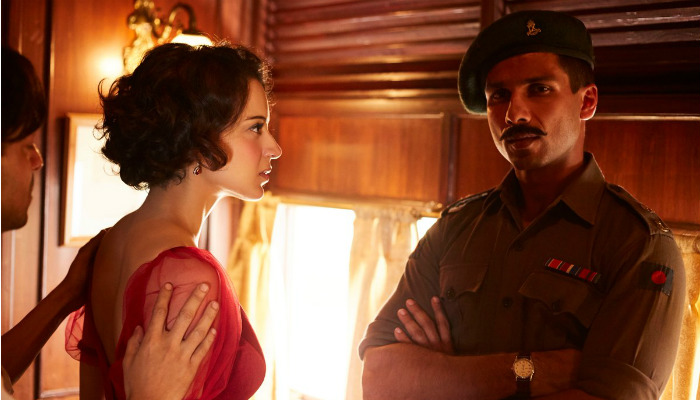 So when the tabloid Pinkvilla told Kangana about Shahid’s reaction, she lost her cool. She said That line he (Shahid) must have been borrowed from Hrithik. He would have thought that dude I will borrow these claims from Hrithik.

Almost everyone would remember when the ugly spat broke out between Hrithik and Kangana, the former said the actress was building things in her head. He had asserted relations between them were strictly professional and nothing more.

Kangana taking a jibe at Shahid using Hrithik’s name was something not many would have expected. The three-time National award winning actress added:

I haven’t said such things. I give my version of the situation. When you are enacting a scene, we don’t do time pass. When we are asked questions on intimate scenes, especially to girls, there is a sleazy undertone to it. ‘Kaise laga aapko kiss karke?’ What am I supposed to say? I can’t say acha laga ya kharab laga. My purpose is to answer it as an actor.

Well, we wonder how Shahid will respond to this statement of hers. Their movie Rangoon is slated for a release on 24 February.