Priyanka Chopra has hardly ever played the role of a villain. The only memorable performance she delivered as one would have to be her role in 2004 Bollywood romantic thriller Aitraaz so, we don’t know what it is that PeeCee will bring to the table with her role as the antagonist Victoria Leeds in her upcoming Hollywood debut Baywatch. Correction – ‘we didn’t know’ ’cause the new Baywatch clip gives us all we need to know about Priyanka’s villainous role.

In several interviews, Priyanka Chopra has mentioned that her villain, Leeds, is a cunning, mean-spirited woman who is also a bit of a fancy-pants. And she wasn’t lying at all! In just about a 20-second long clip, we get to see all we could probably need to know about Leeds. But, Priyanka did leave out one essential detail about her character earlier- she is flirtatious as hell! 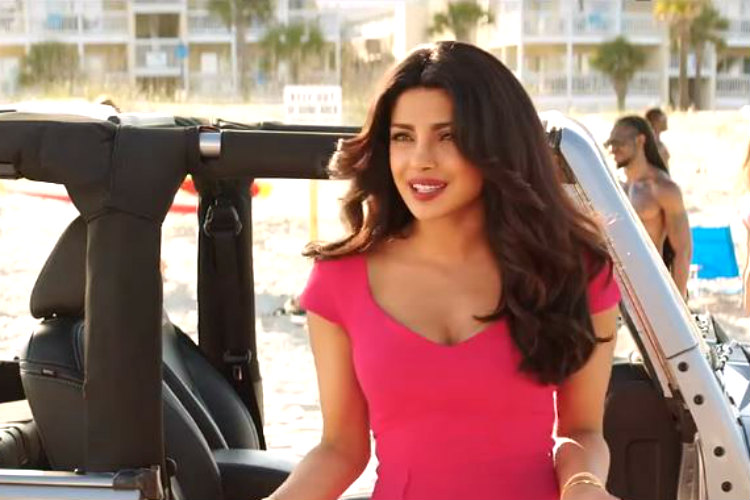 Priyanka Chopra as the villain Victoria Leeds in Baywatch.

In the clip, we can see Priyanka’s Victoria Leeds, the new owner of the Huntley Club, arriving at the beach to greet the lifeguards. While inviting them to the club in a condescending manner, she steps on a stool so as to not get any sand on her flashy heels or in between her toes. She even trips over, or at least does so intentionally, only to fall in the arms of The Rock.

ALSO READ: Priyanka Chopra’s Baywatch is giving tough time to the Censor Board. Here are the details

Also starring Dwayne Johnson aka The Rock, Zac Efron, Alexandra Daddario, Kelly Rohrbach, Ilfenesh Hadera, and Jon Bass, Baywatch will be releasing on June 2 in India, a week later after it hits the theatres in the United States.

Here is the full clip from Baywatch: