The theatrical release date of Malayalam superstar Mammootty’s upcoming film, The Great Father is one month away, but the film is creating records with each passing day. Written and directed by debutant Haneef Adeni, the film has been produced by August Cinema – a joint production of Malayalam actor Prithviraj, director Santhosh Sivan, Tamil actor Arya and producer Shaji Nadeshan.

InUth had previously reported that teaser of the Mammootty starrer has broken the record of the teaser of Aamir Khan’s Dangal to become the fastest Indian film teaser to cross 6 Million views on Facebook.

And now, the new official poster of The Great Father, which had released on Friday has broken all the existing records for a Malayalam film poster released in recent times. The poster featuring the three-time National award winner in a menacing look has so far raked in 70,000 likes and more than 2,800 shares on Facebook. The viral poster was released by Mammootty himself on his Facebook page. 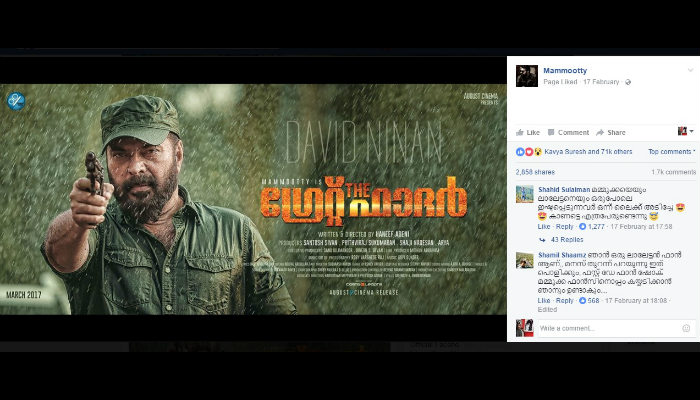 The Great Father will feature Mammootty in the titular role of David Nainan Vedippara, while Arya will be seen in the role of Andrews Eapen Umbakkal – a character with shades of grey. The film also stars Sneha, Baby Anikha, Shaam, Mia George, Malavika Mohanan, Manikandan Achari and IM Vijayan.

The Great Father will be an acid test for Mammootty as the actor is struggling to deliver a blockbuster at the Kerala Box Office since the release of Bhaskar The Rascal in 2015. Apart from The Great Father, Mammootty 2017-line up include Ranjith film Puthan Panam.