Malayalam actor Mohanlal is on a record breaking spree. The actor who just delivered hat-trick of blockbusters at the Kerala Box Office with Oppam, Pulimurugan and Munthirivallikal Thalirkkumbol has set an unique record in Mumbai as well.

Munthirivallikal Thalirkkumbol, the family entertainer which had released on 20 January 2017 has successfully completed 50-theatrical days at the Kerala Box Office. Directed by Jibu Jacob and produced by Sophia Paul, the family entertainer featured the four-time National-award winner in the titular role of a family man, Ulahannan. The film also marked the collaboration of Mohanlal and Meena duo after the 2013 blockbuster, Drishyam. The film has already crossed Rs 30 crore to become the first Malayalam blockbuster of 2017.

While the film is continuing its glorious run across the cinemas of Kerala, it has set an unbelievable record in Mumbai. 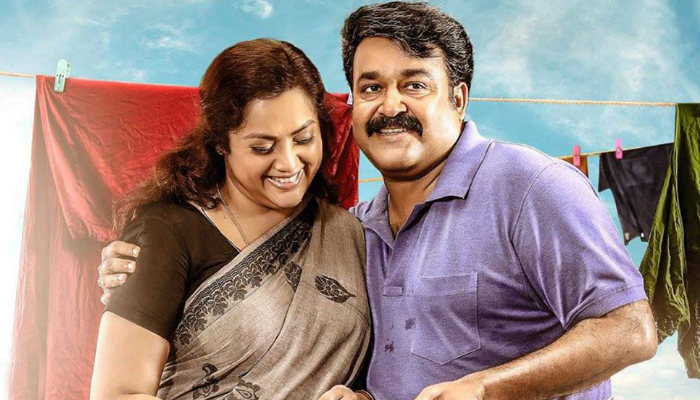 Mohanlal in a poster of Munthirivallikal Thalirkkumbol

Munthirivallikal Thalirkkumbol has successfully crossed 50-theatrical days in the Mumbai circuit as well, which is extraordinary considering that the likes of Shah Rukh Khan’s Raees, Hrithik Roshan starrer Kaabil and Akshay Kumar’s Jolly LLB 2 struggled to go past 40 days in their strong base, Mumbai. Munthirivallikal Thalirkkumbol, which had the same theatrical release in Mumbai as Kerala is still running to packed houses in majority of the screens across Mumbai. And with this feat, Lalettan scores a hat-trick at the Mumbai Box office as the actor’s previous releases, Oppam and Pulimurugan too ran for more than 50 days in Mumbai. Mohanlal also emerged as the first South Indian superstar to do so in Mumbai.