It’s widely known that Malayalam actor Dileep has officially launched a new organisation for Kerala theatre owners. The association, named as FEUOK (Film Exhibitors Organisation of Kerala) was formed following a three-week long strike between Kerala Film Producers Association and Kerala Exhibitors Association over revenue-sharing. On 24 January, Dileep came as a saviour by launching FEUOK and stated that the new organisation was formed for the well-being of Malayalam cinema and theatre owners.

However, the truth is that there is not much difference with Dileep’s FEUOK. Dr Girija Kp, the owner of Girija Theatre, popular film theatre in Thrissur, Kerala lashed out at the new film federation. She added that the entire film federation is a mafia and due to this she had to suffer a lot.

Dr Girija took to her Facebook page to give an update about the issue.

Here is what she wrote on her page: 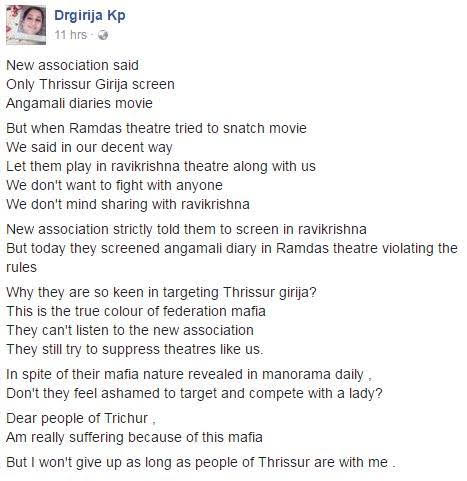 “I’m feeling sad to tell that these days we have to argue with other cinema owners to screen films in my theatre. My main issue is with Dr Ramdas, the owner of Ramdas Cinemas. I have to literally fight with him almost every time to screen the film in my cinemas. They are targeting Ganam Cinemas as well. They always tried to stop giving films to Ganam Movies. But whenever I get films, I always used to help them. Due to this, Federation issued one lakh fine to me. But Federation revoked the fine since Manorama Daily reported the matter. Even the recent strike happened to close Ganam Cinemas Thrissur and Ganam Kattanam forever. But I didn’t participate in the strike. Instead, I had screened Premam in my theatre. There was no value for federation rules as well since Dr Ramdas was doing all the tricks as the Federation member. Once I went to court against Mulakuppadam Films for screening Pokkiriraja, Ramdas tried his best to snatch the film from us even after the rules was against his cinemas. But later, I won the case as Court decided only my cinema can screen the Mammootty starrer. I had to take protection from the Court to live peacefully from this federation mafia”.

Well, apart from Girija theatre, SN Haripadu Theatre, Alappuzha too are facing the same issue. They also posted something on the same lines of their Facebook page. The update read:

There is huge demand from the audience to screen the new Malayalam film Oru Mexican Aparatha in our cinemas. But since we have received an objection from Vallakalil Cine Complex, Mavellikara not to screen the film, we request our beloved audience to excuse us.

Janapriyanayakan Dileep, are you listening???