Renowned Iranian filmmaker Majid Majidi is making a Bollywood debut and we are mighty kicked about it.

The trailer of Majidi’s first Bollywood project ,‘Beyond The Clouds‘ , which was released with much fanfare on Monday, casts some dark clouds over our enthusiasm. Set in the dirty by-lanes of Mumbai’s slums, the film stars Ishan Khatter and Malvika Mohanan as siblings in the lead role. The film depicts the struggle of a young slum boy Amir (Khatter) aspiring to make it big. However, the path he chooses – drug trafficking – eventually lands his sister Tara (Mohanan) in jail.

But if compared to his masterpieces like Children of Heaven, Baran and The Songs of Sparrow, the trailer of ‘Beyond the Clouds’ looks pale, repetitive and un-original. In other words, ‘Beyond the Clouds’ is a template Indian audience are long familiar with. Not only in the terms of story, but also cinematic depiction. There’s a striking resemblance of the trailer with Danny Boyle’s 2008 drama film Slumdog Millionaire.

An admirer of Satyajit Ray, Majidi had long been looking to extend his artistic pursuits in Bollywood. He also feels India and Iran are closer than what’s usually known. We have to watch the whole movie if such closeness reflects anywhere in the film. If you are a Majid Majidi fan, the trailer will certainly take time to absorb. Some may want to take another look to be sure if it’s Majidi only or not. That’s not to say it’s a bad trailer. It’s just that Majidi has taken a new role. 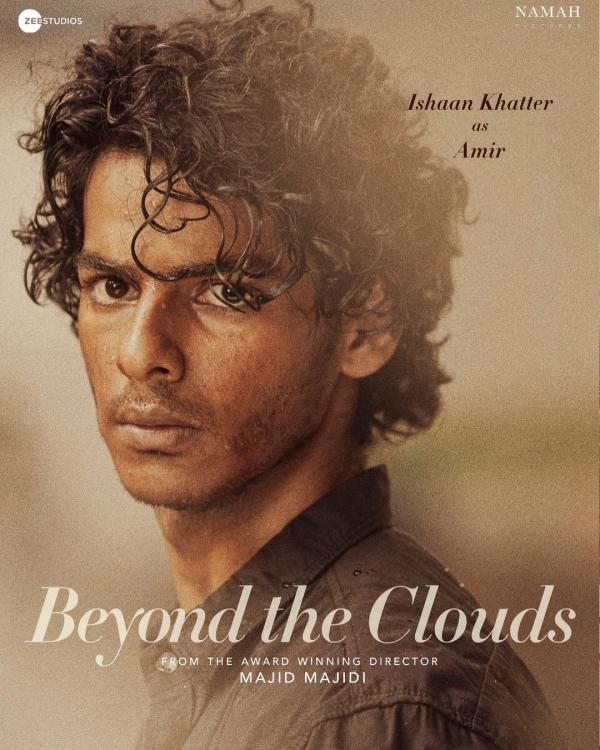 Also, Majidi, who’s known for layered use of music to create drama, seems to have relied more on action than his trademark subtle, emotional expression. There’s fast music, chase sequences and stereotypical representation of Mumbai mafia. Perhaps, it could be Majidi is aware of his Indian audience! There’s nothing Majidi Majidisque-like in the trailer.

The trailer depicts Amir’s dilemma who is caught in a catch-22 situation as his sister’s freedom, whom he calls his kaleja and his jaan, would mean his imprisonment. That’s signature Majidi – ordinary lives, everyday struggles, hopes, dreams,  relationships, love and dilemma. It will be answer to this dilemma for which Majidi will eventually be judged once the film releases.

Majidi’s choice of a story in slums looks conscious but has he given his best to it? It’s not the right time to answer this question. However, there’s a certainty behind Majidi’s reinvention of himself as a director when it comes to Bollywood. Yet, there’s a possibility Majidi might have been deliberate in utilizing his caliber to depict a story differently in a country, so diverse, fast, industrial and unequal from his own.

Another thing which raises the bar of expectation on the movie is the music by A R Rahman. Two masters of their trades from two different parts of the world, getting together to weave magic on the screen is a relic for any movie buff. But will the magic work or leave audience disappointed? For that, we need to wait as the film will be released on March 23.