For a film whose dialogues are sparse, and which, even in its most volatile moments seemingly exercises restraint, the noise around Alfonso Cuarón’s Roma, has been deafening. Safe to say that the Golden Lion-winning film is currently being examined frame-by-frame by every film (and Twitter) critic worth their Oxford comma. Strip-studied to find more pegs than in a locker room, to hang riveting headlines off of, than Cuarón might have possibly intended. In that Roma isn’t unique. For what film does not go through the critics’ laundry service? But what Roma has done, and done well, is begin a (shaky) dialogue about the ‘invisible’ lives of the domestic help.

It is a film that’s going to make most Indian households, who revel in othering the house help, mighty uncomfortable. 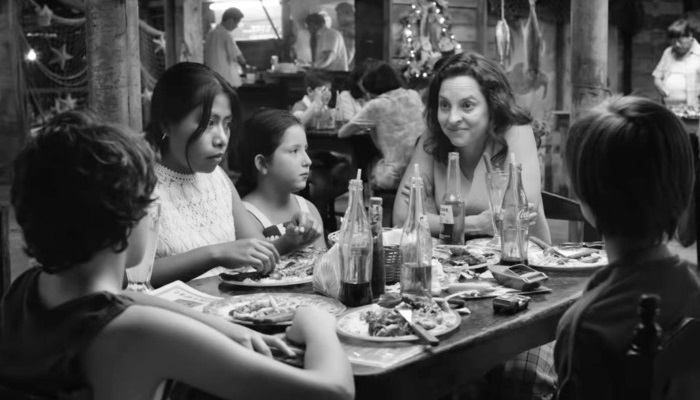 Set against the backdrop of Mexico City’s Corpus Christi Massacre of 1971, when students clashed with soldiers turning the streets into a battlefield, Roma is the story of an upper middle-class family, snug in their material trappings. The family of seven lives in a big house with their two female indigenous Latin American domestic help, whose days are wholly occupied in taking care of the family; with their ‘me-time’ is reduced to exercising under the candle-light, since their electricity consumption is regulated by the grandma. It is several such little moments in the film, that seem intrusive, fascinating and at the same time sneak in a quick, brutal reminder of the privileges of class, that make up the very fabric of Roma. The film occupies that rare, enviable position of being able to sustain itself in its complexity without a melodramatic plot-line.

Plenty of criticism has been aimed at Cuarón’s depiction of Cleo Gutiérrez (Yalitza Aparicio), the indigenous nanny slash maid, whose life is the central theme of the film. The New Yorker has called hers as ‘the missing voice’ of the Roma. And for a film that’s about Cleo, her job, her personal desires, and her heartbreak, it is that true the film offers little of her background story except a fleeting line about how she misses her home, and another one about her familial lands being taken away by the government. In contrast, we know much about the mistress of the house, Sofía (Marina de Tavira), who’s studied biochemistry, is a stay-at-home mom and who, after her husband abandons her, goes into the publishing business.

What we also know is that she is the sort of employer that’s rare to find in a desi society. She is attentive towards Cleo’s medical needs after she gets pregnant, and is kind to her. These may be words alien to many, nay, most of India’s ‘invisible’ domestic task force. Kindness, attention, gratefulness aren’t things the domestic help here encounters in his/her underpaid and overworked lives.

For who can deny that in most Indian households, borders are drawn where the utensils are, where the washrooms are, where the food is eaten, where “they” who come from the marginalised section of society, sit (apart), while the family enjoys nights out and vacations together.

There’s a scene in the film where right after being yet again disappointed by the silence and absence of her husband, Sofía still remembers to sit Cleo down, and ask her what’s bothering her. On learning of Cleo’s pregnancy, there are no dramatics, no long-drawn scenes talking about muh kala karna, no hand-wringing or threats of any kind. Cleo isn’t taken to some sarkari hospital, but to a gynaecologist in a big hospital that the family uses. This is a scenario, I’m willing to bet, that rarely comes into play in an Indian household, that despite being large and often bursting at the seams, is still grappling with the concept of sex. Or basic human decency when it comes to those not of the same class or caste.

When the student protests openly break out in the city, Cleo is out baby crib-shopping with Sofía’s mum. When Cleo’s water breaks, it is Sofía’s mother who holds her hand, as they head to the hospital. It is an oddly endearing scene, even though nothing is going right, and things are about as tragic as can be.

Imagine a scene like this happening for real in a society where physical violence, derision, and neglect falls in the lot of a maid — oftentimes a minor — whom we value only as a commodity of convenience. It is well-neigh impossible, is it not? Dadi holding the maid’s hand, praying to the lord for her and her out-of-wedlock baby’s safety? That page is going to take forever to load.

If only Roma could be premiered on Indian television, and labelled mandatory for families. The film is by no means perfect in its depiction of the marginalised, but even then, one hopes that the relationship Sofía shares with Cleo might make the viewing of the domestic help as a human being, just a tad bit easier.