Kriti Sanon is set to work with Ayushmann Khurrana and Rajkummar Rao in Yash Raj Films next, ”Bareilly Ki Barfi”. The romantic comedy is directed by Ashwiny Iyer. The star cast is fresh and so is the story plot. She posted an image of the final draft of the movie. She wrote, ” My companion for the next 45 days! Off to Lucknow! Thanks Ashwiny for that lovely note.” In the picture, a note which was written by Ashwiny stated, “Dear Kriti, Have a blast with this story and enjoy the process. Together let’s have a blast and hope you enjoy working with me. Love and Hugs. A” 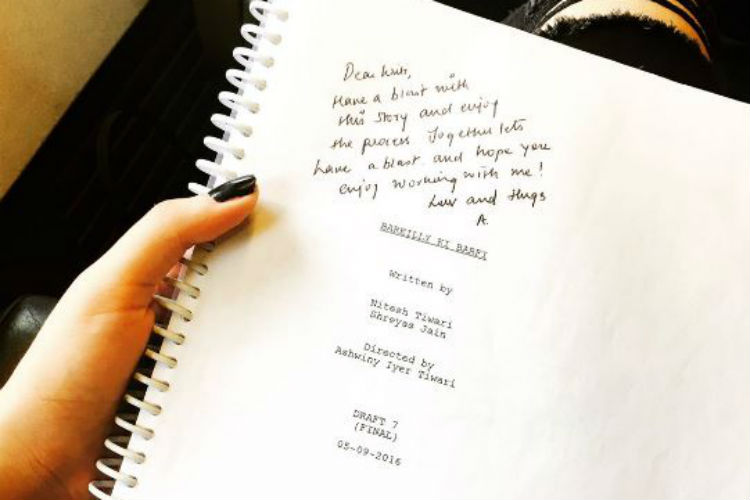 In the film, Ayushmann Khurrana will be seen playing the role of a printing press owner. While Rajummar Rao will be seen as an author in the film, Kriti will portray the role of bubbly girl. The story of the movie is deeply rooted in the state of Uttar Pradesh. ”Bareilly Ki Barfi” is being produced by BR Studios and Junglee Pictures. The starcast is having a gala time in the bylanes of Lucknow. A photo has been doing the rounds on Twitter where Ayushmann and Kriti posed with the director of the film. 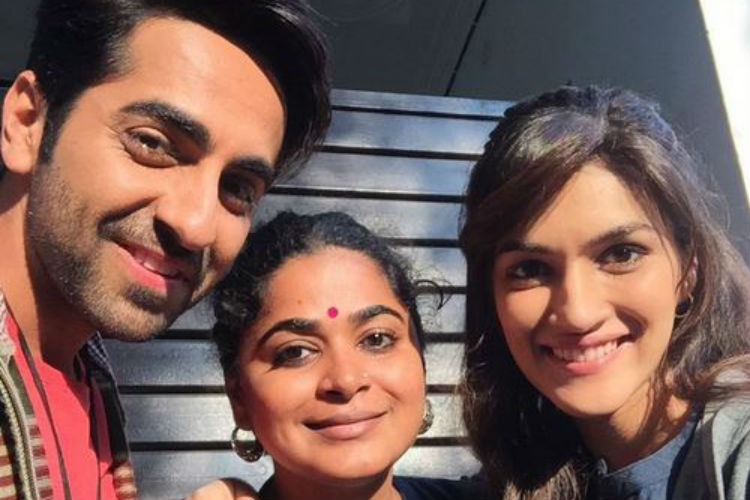 Ayushmann was earlier shooting for ‘Meri Pyaari Bindu’ alongside Parineeti Chopra. Incidentally, the actor is playing the role of a writer in the film. This will be the first time Ayushmann and Parineeti are coming together for a film. The actors are keeping their fans posted with the day to day update of their film. As catchy as the title of the film sounds, the storyline is said to be ‘Hatke‘ as well. Rajkummar Rao’s presence in the film is something to look forward too as well. Recently, Yash Raj Films Talent posted a video on their Twitter account from the first day of the shoot.

They also posted a photo on their social media account. The picture is from the sets of the film.

Day 1: We caught @ayushmannk on the #BareillyKiBarfi set, in one of those quaint lanes of Lucknow, sipping on some chai! #Shoot pic.twitter.com/VkEg5CxLNx

Apart from that, Kriti Sanon has wrapped up the shooting of romantic flick ‘Raabta‘. In the movie, Kriti will be seen romancing Sushant Singh Rajput. The ‘Dilwale‘ actress also has another movie in her kitty. She will soon start shooting for ‘Lucknow Central’ which also has Farhan Akhtar. In an interview given to PTI, she said, “I have met him (Farhan) on formal occasions as he is busy with ‘Rock On 2’. Whatever I have seen of him on and off screen, he has a great sense of humour.”