Koffee with Karan‘s second episode was something every Twinkle Khanna fan was waiting for. Since its announcement, fans were waiting to see Mrs Funny Bones at her best. And she did it. She just nailed the show with her quick and witty replies. Akshay is, of course, known for his diplomatic nature, Twinkle is the person who speaks her mind out. And she was stunningly candid. So the episode started and twinkle calling Karan as “the other man” and here starts the politically incorrect statements by her. Here are 5 statements from the show that makes her best at what she does: 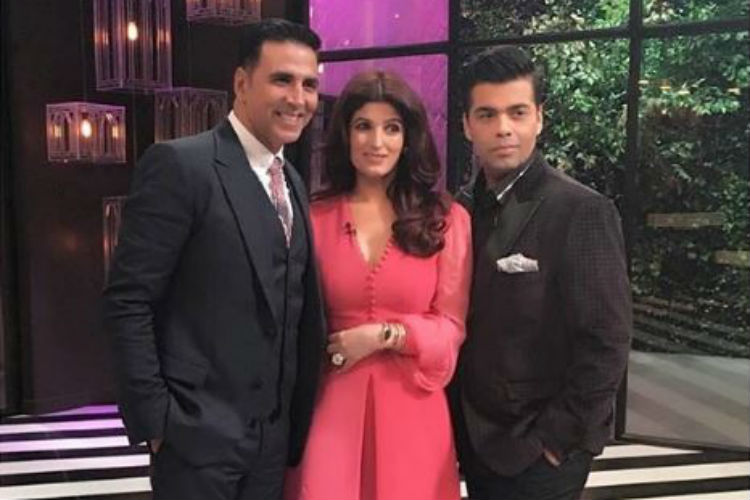 1. Karan — “the other man”: Oh yes! She called Karan the other man. This happened when Karan asked Akshay about Mrs and Mister sitting very close on the couch. Karan even said if there a space for a third person and Twinkle immediately invited him on, saying “you are the other man.”

2. Unbuttoning, and getting arrested: Do you remember the time when Twinkle unbuttoned the Akshay’s jeans at a fashion show? That infamous controversy landed Twinkle into the trouble. She spoke about it on the episode and even said that how millions of people unbutton, unzip, pee on the walls of the police station, but nobody gets arrested. She also said that she is out on bail of Rs 500.

3. Kundali milane se pehle, genetic chart milao:Though the statement was said by Akshay Kumar, its reference was made by the Mrs Funny Bones. While they were talking about Akshay and Twinkle’s marriage, the latter said “Primarily you get married to have children. So you are introducing this (pointing out at Akshay) genetic strain into your family life. I wanted to know what diseases were running in his family.” Well Akshay agreed and advised, “Kundali milane se pehle genetic chart milao” to couples.

4. A fling with Mister: While Rustom actor was all diplomatic about his relationship with Twinkle, Mrs spoke it all. She narrated the entire situation. She said: “For the first time in my life, I wanted to have a fling. So I decided to have a fling with him which will last 15 days.” She further added, “It was the length of the outdoor and I ran out of books in Calgary, there was no TV and I was really bored. And there he was, so it was kind of perfect.” She even called Akshay a six feet of chocolate ice cream.

5. Karan’s love: We have heard it many times and once more. The only woman Karan ever thought he was in love with was Twinkle Khanna. During the episode, something came up and he Karan said that he was in love with her for a very brief moment. And later he asked why? To which she replied: “Because my testosterone level is almost a man’s, and I had a moustache at that point. So you must have looked at that moustache and said, ‘I like that. It’s really hot. I want that.”

6. Karan is the new Mrs Funnybones: When Karan asked about the meanest thing anybody has said about her writing. He was pointing out her columns, she said, “People said that Karan is new Mrs Funnybones. That hurt me as I didn’t want  my standards to go so down.” Oops!

Overall, Mrs Funny Bones was quick and witty on the show. Akshay sung a song which was really cute. Make sure you watch the episode for more details.

Who thought the Khiladi of bollywood could be so romantic? Watch him serenade @mrsfunnybones in style on #KoffeeWithKaran! pic.twitter.com/gKCUxxpQWG