The curtain is ready to fall on the US Presidential elections and everyone has picked their sides. While some have displayed dedicated support towards the misogynistic, over-grown baby aka Republican Presidential nominee Donald Trump, others rally behind the “lesser of two evils”. It was real neck and neck there for a while until the first Presidential debate happened and Trump started to… you know, talk. Hillary Clinton’s campaign also drew major support from feminists after Trump’s “locker room banter” went viral. Being a woman, she sort of became their confidant. Clinton managed to rope in a few Hollywood celebrities, mostly females, into her campaign too. Here are some of the popular celebrities who say, “I’m with her”: 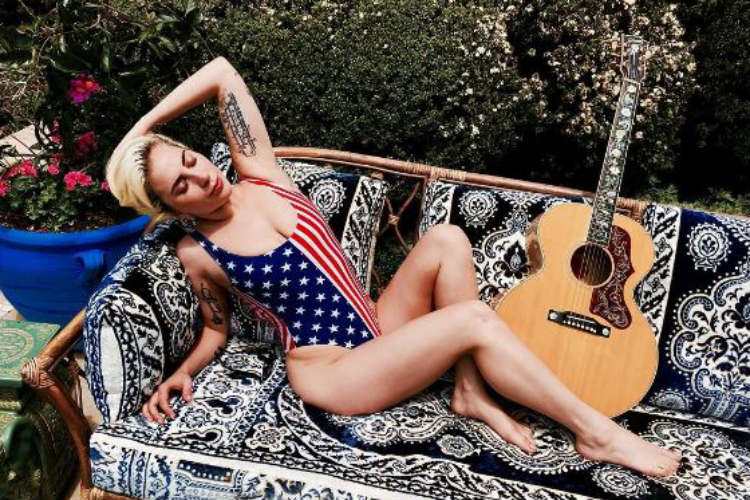 The pop sensation Lady Gaga started rooting for Clinton way before it got cool. Just kidding, it still ain’t cool. She posted a photo of herself in an American flag swimsuit and captioned it, “#HILLARY2016 Nothing can keep a strong woman down. VOTE for the first female U.S. president in history. Shake it up America, this country needs a little rock n’ roll.” Ever since she has campaigned for Hillary strongly and even her bio states, “#VoteHillary United We Stand To Protect Our Freedom.” 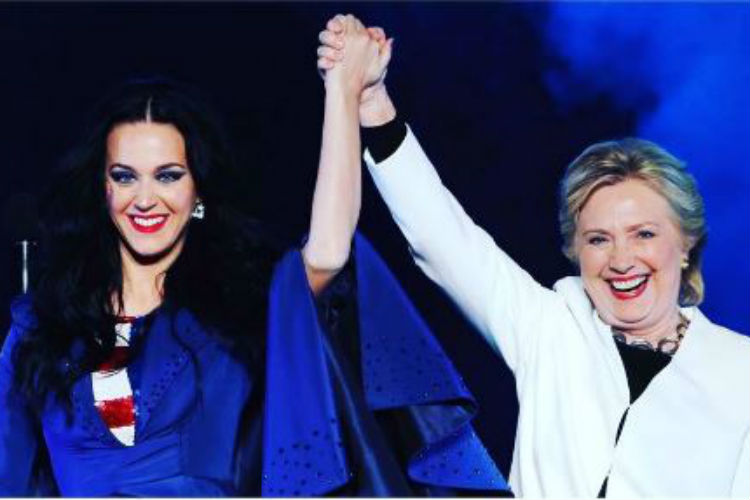 ALSO READ: Katy Perry, Orlando Bloom dress up as Clinton and Trump for Halloween
Katy Perry has been a strong Hillary supporter even going as far as doing door-to-door campaigns for the Democratic Presidential nominee at the University of Nevada, Las Vegas, wearing a “nasty woman” T-shirt. Perry is such a fan that even her Halloween costume was Clinton. She had uploaded a video of herself from the polling booth as she dropped her vote and encouraged others to go for Hillary. 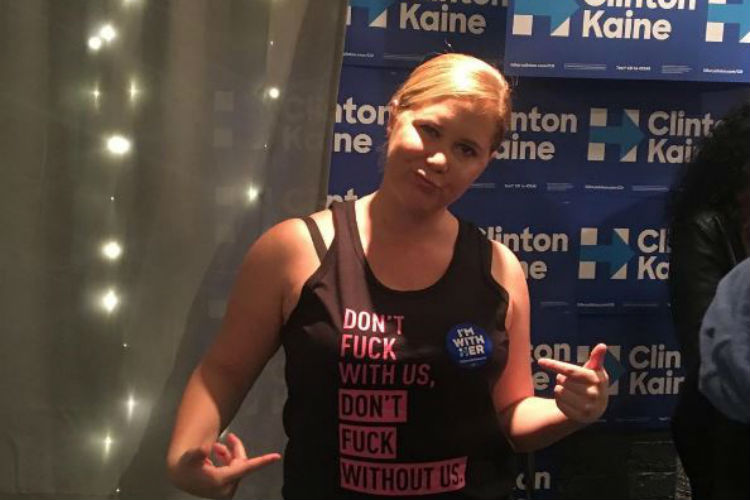 Popular stand-up comedian and actress Amy Schumer had announced her support for Clinton through Twitter by posting a snapshot of when the two were on Ellen Degeneres’ show together. She captioned it, “#imwithher remember what thumper said everyone.” She has been critical of Trump’s campaign, which is a common subject in her stand-up events. Guess she doesn’t want any President snooping around her pussy. 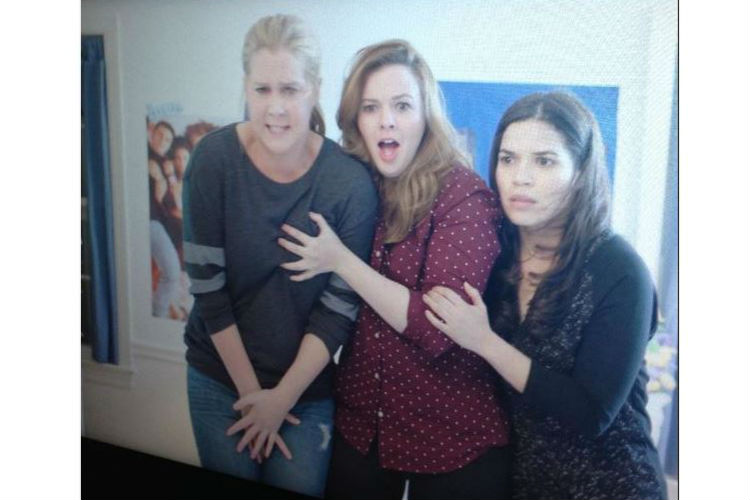 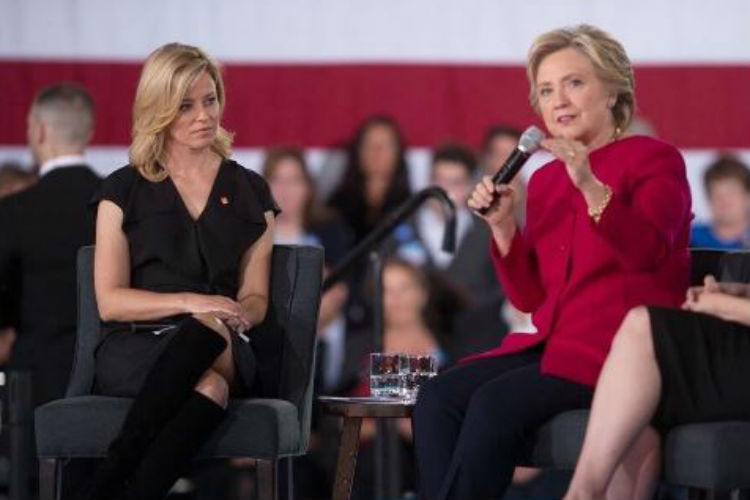 Actress Elizabeth Banks opened for Clinton at the Democratic National Convention 2016 where she recalled Clinton’s speech from 1992 where she supported her husband, Bill Clinton. “Hillary Clinton rocked my world,” Banks said at DNC. “A smart, committed, successful woman. And not for her own benefit, but a fighter for women and children, cops and first-responders, health care and girls around the world.” 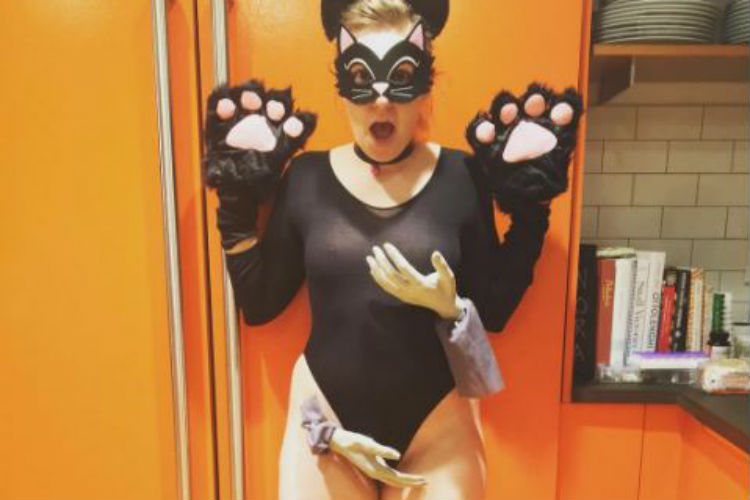 Lena Dunham is an out and out Hillary supporter and she justifies her choice. It’s not because she’s voting with her vagina. Dunham believes that Clinton would get the job done much better than Trump. She even mocked Trump’s “grab them by the pussy” statement through her Halloween costume.

Who run the world? Girls. She said it and she meant it. Beyoncé joined Team Hillary when she attended a fundraiser for her campaign. Later, Clinton tweeted a photo of Queen Bey from the event captioning it, “Say you’ll Bey on Team #Hillary2016, too.”

Recently at the Cleveland concert, Beyoncé had also said, “I want my daughter to grow up seeing a woman lead our country and knowing that her possibilities are limitless and that’s why I’m with her.”

During his Ohio tour with Beyoncé, rapper Jay Z condemned Trump saying, “This other guy, I don’t have any ill will … he cannot be my president. Once you divide us, you weaken us, we are stronger together.” He then went on to support Hillary Clinton’s campaign by calling her the “next president”. “And without further ado, I would like to introduce to you the next president of the United State, Miss Hillary Clinton,” he said. 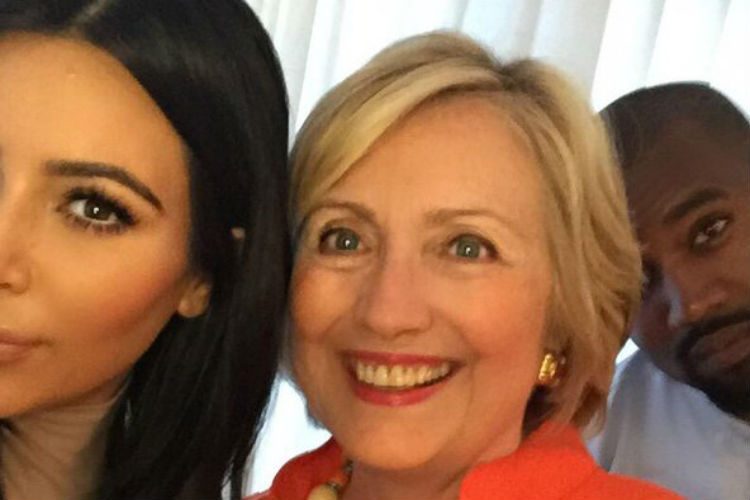 Kim Kardashian has been a fan of Clinton but, Caitlyn Jenner’s support for the Republican party left her conflicted and unsure about her vote. She finally decided to go for Hillary and explained that she made the decision based on the fact that the things that matter to her, align with Hillary’s campaign most. 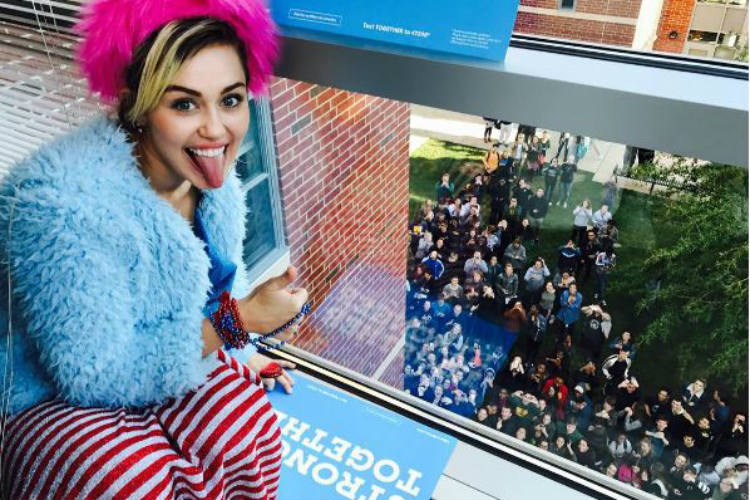 At Ellen Degeneres’ show, Miley Cyrus showed immense support towards Clinton’s campaign. “You listen to so many people, especially when you’re watching the debates, specifically Trump, say so many dumb things, and these young kids were so smart and so amazing to talk to them, not why we should just be terrified of the other option – it wasn’t about what a horrible guy Trump is – nasty guy Trump is. It was really about what a great woman she is. And we would choose her no matter what it would be, who she was up against,” she said. The 23-year-old even went on to call her a goddess. 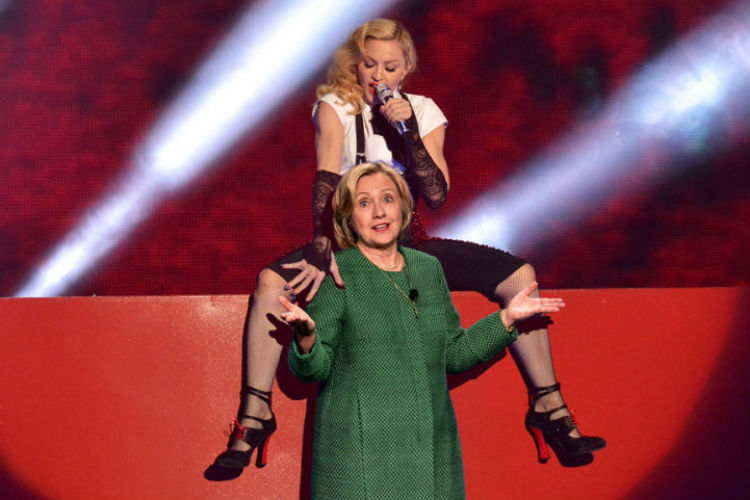 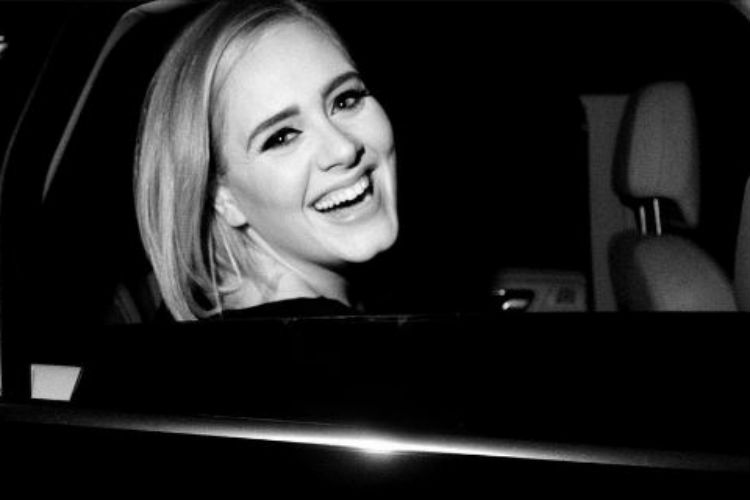 ALSO READ: Adele ain’t an American. So what? She still endorsed Hillary Clinton
Although she’s not an American citizen, singer Adele has shown support towards Hillary’s presidency. At a Miami concert, with Clinton in the crowd, Adele said, “Don’t vote for him. I can’t vote but I am 100% for Hillary Clinton, I love her, she’s amazing.” She added, “I am English, but what happens in America affects me, too.” Clinton later responded by saying that the singer’s support “meant a lot to her”.