While people can’t seem to stop swooning over Justin Bieber coming to India for his Purpose World Tour, there is a lot more to be excited about. English singer-songwriter Ed Sheeran, who recently released his third album Divide, will be coming to India. That’s right. Now you all can shake a hip to 2017’s dance anthem Shape of You as Sheeran performs it live.

In a recent announcement on his website, Sheeran added a few more shows to his Asia tour which includes Mumbai, India. The 26-year-old singer will be coming to India in November and will hold a concert in Mumbai on November 19 (Sunday).

ALSO READ: This catchy mash-up of Ed Sheeran and A R Rahman’s songs is just mindblowing! 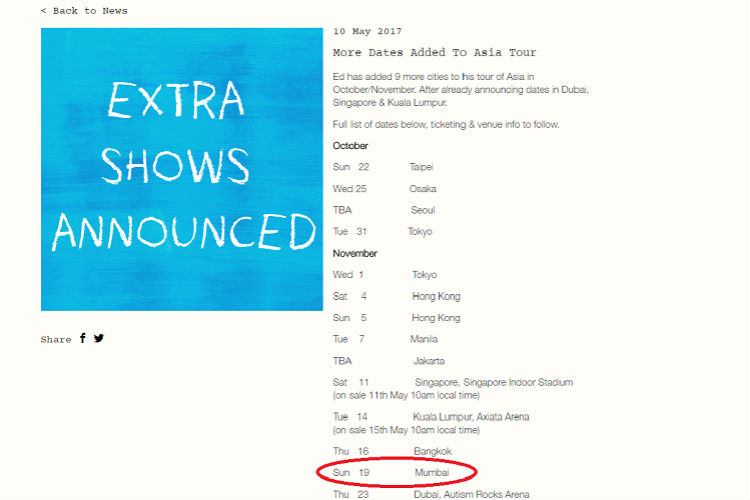 The Grammy Award-winning artist has a huge fanbase down here especially after the release of his latest album which tossed him up global music charts. The record-shattering album has thus far, been the artist’s most successful work. As of now, not a lot is known about Ed Sheeran’s concert in India but we bet the singer will nail the gig better than Bieber. #SorryNotSorry

Sheeran has been quite busy after taking a year-long hiatus recently. It was also reported that he has been cast for a role in HBO’s hit fantasy drama series Game of Thrones where he sings a song for Maisie Williams’ character Arya Stark.