Post the complaint of a Mumbai-based NGO against the screening of Jaago Hua Savera, a Pakistani film, the organisers of Jio MAMI 2016 have announced the cancellation of screening. In an official statement released today, 17 October, the organisers said: “Given the current situation, the Jio MAMI 18th Mumbai Film Festival with Star has decided not to programme Jaago Hua Savera as part of the Restored Classics Section.”

Earlier, the NGO named Sangharsh Foundation had filed a complaint in Amboli police station asking for the permission to protest against the screening of the film on 20 October in Mumbai. The festival which kickstarts from the same date was scheduled to screen the Aajeay Kardar directorial and several members from the organising committee, including Kiran Rao and Anupama Chopra, had confirmed the screening of a Pakistani film in the festival.

In their complaint to the police, the foundation had asked to not allow the screening of Jaago Hua Savera on the grounds of ‘national sentiment.’ Part of the complaint said: “The organisers of this event are more likely to flare the outrage more among the people by telecasting this Pakistani film in their film festival. This will just not be acceptable as it will give rise to more civil tension and outrage among the people. Moreover, The Indian Motion Picture Producer’s Association, popularly known as IMPPA, has also decided to ban Pakistani Actors/ Actresses to work in Bollywood and also almost all the single screen theatres have also decided to ban the movies with Pakistani actors so why the organisers of Jio MAMI 18th Mumbai Film Festival with Star are pouring so much love towards the Pakistani actors and Pakistanis  by telecasting their film here.” Here’s the copy of the complaint. 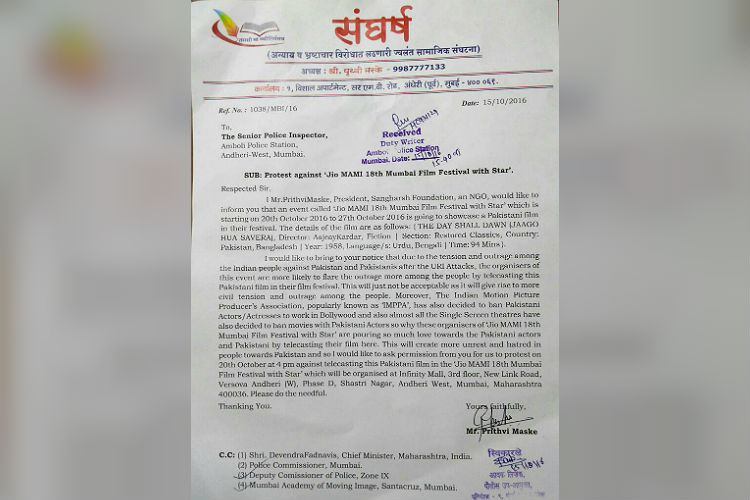 Wonder what more lies in the fate of the anti-Pakistani artistes movement shaping up in the country.