So today’s paper had an awesome (Read: shocking) surprise for most of us. On the cover page of Times of India, dashing MI6 secret agent and super-spy, Pierce Brosnan aka our good ol’ James Bond of the 007 franchise, was endorsing ‘Pan Bahar’.

When the brand ambassador is also a satisfied consumer of the product, he puts down his signature. You mean Pierce Brosnan chews Pan Masala. pic.twitter.com/IqLVZFVv0K

And the first thing that flashed in front of my eyes was ‘James Bond stepping out of his car, chewing Pan Bahar and then he spits it out to introduce “The name is Bond. James Bond.”

Okay that is strange. Soon I went on Twitter to see the reaction and here it is! Bang on!

One of the tweets: “Priyanka Chopra chews Rajnigandha & now Pierce Brosnan chews Pan Bahar. Now I know why I am not successful, will start chewing gutka today.”.

OMG. There’s a video too. UNESCO has voted this as the best video in Kanpur. https://t.co/iDCHi3E9NW 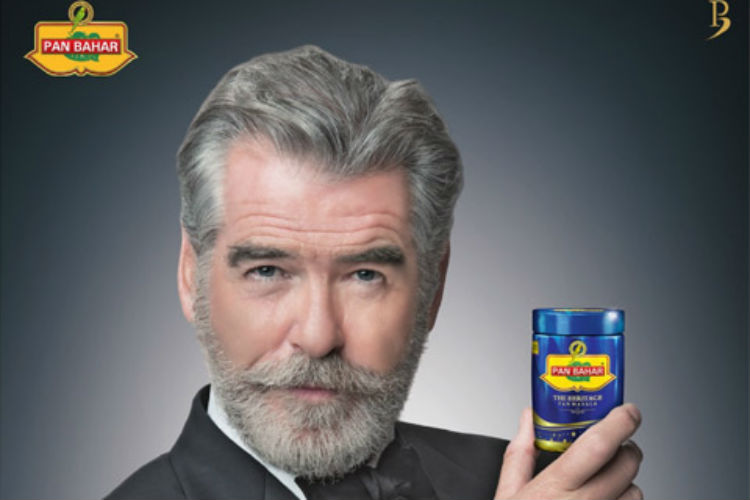 So, is it that our Desi girl has influenced Bond to endorse something that our government should have banned long ago? But then we can’t deny the fact that Piggy Chops is one of the highest paid TV actresses now. Ohkay! so chewing rajanigandha helped her to reach here :P.

So if Hugh Jackman can give his edgy touch to Micromax promotions and Lionel Messi can get classy for Tata Tiago, even James Bond can go a step ahead for ‘Pan Masala’ and moreover he replaced Bollywood actor Saif Ali Khan.

Brands getting an international endorsement is not a new thing  but what makes the idea interesting is the celebrity endorsing the brand. So if Hugh Jackman gives his edgy touch to Micromax promotions and Lionel Messi gets classy for Tata Tiago, we have James Bond for ‘Pan Masala‘.

Now James Bond movie name would be like Spit Another Day,RedTeeth,The Corner is Not Enough Pierce Broasnan pic.twitter.com/dOP1LfMgjn