It happens to the best of us. A series of bad days and next you know, you are on social media abusing people left, right and centre.

The stand-up comedian used choicest of abuses against the media and engaged in Twitter fights with people who questioned his posts.

While some tweets were in reference to Salman Khan’s sentencing in the blackbuck case, others were on his source of income . 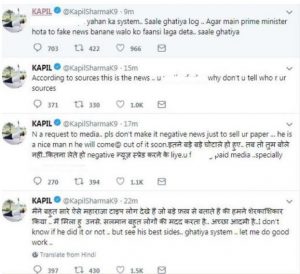 Soon, a clarification claiming that his account was hacked.

“Hi all please ignore the previous offensive tweets as my account was hacked. Apologies for the inconvenience caused. Love and regards to all,” he tweeted.

What led to more confusion is that Sharma deleted this tweet as well.

Hacked or not, Twitter was in no mood to spare Sharma.

1. You never use full stop at the end of sentence.
2. You use dots in middle of all the tweets…#abusiveKapil pic.twitter.com/uNFcoZrHEc

The 37-year-old actor recently returned on television with a new show titled, Family Time With Kapil Sharma. However, it failed to generate TRPs and it has been reported that the showrunners are contemplating to pull the plug on the show. Since his fallout with fellow comedian Sunil Grover, Sharma has mostly been in news for wrong reasons.