He was only four, when Iqbal Masih was shipped off to work as a child labourer in a carpet factory to pay off his father’s debt. An amount of reportedly Rs 830 approximately. The boy worked in the factory for about six years, after which he decided to run away. Hauled in by the police, he was brought back to the carpet factory, and beaten black and blue to be made an example out of. But Iqbal escaped again after his ‘punishment’. An advocate for child’s rights, Iqbal Masih was only 10 when he became a full-fledged activist against bonded labour in Pakistan.

This is the second installment in the animated series Shattering The Silence, an initiative that hopes to ignite conversation around the prevalence of child abuse in Pakistan. Iqbal’s story is one of courage, that impacted an estimated 3,000 kids. Learning about how child labour had been declared illegal, he escaped the carpet factory and went on to attend a school called Bonded Labour Liberation Front (BLLF), that catered to kids like Iqbal. 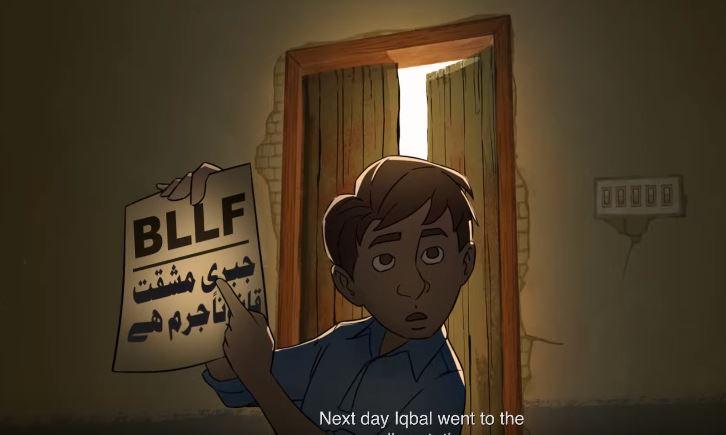 Undergoing an arduous routine of nearly 12 hours of work, seven days a week, with only one break of 30 minutes, 10-year-old Iqbal Masih showed tremendous resolve. He had his voice heard on an international stage, where he recounted the horrors of being forced into child labour in Pakistan. At a gathering in Boston, he told those gathered how BLLF did for children like him, what Abraham Lincoln did for slavery in America. “Today you’re free, and I’m free too,” he’s reportedly said.

Just like the initiative’s first film, Chheena Hua Bachpan, even Iqbal Masih Ka Bachpan features a rather simple visual language, with the help of a narrator.

Obaid’s film stops just short of revealing that Iqbal Masih was killed in 1995. Having just come off an international trip where he was spoke about the circumstances of his previous life, Iqbal was fatally shot dead. Some claim that it was a farmer who had killed Iqbal, but there are also theories floating around that say that he was shot dead by someone who was directly affected by Iqbal’s activism. And maybe, it’s for the best that they leave out the story of his horrific death. As spine-chilling as his murder was, Iqbal Masih’s story needs to be recounted for its pure and unabashed courage.

Iqbal wanted to become a lawyer when he grew up. He was only 12, when he left behind a brave legacy for Pakistan’s next generation of children.