Pop star Beyoncé Knowles has always been the Goddess of music. In a new photograph, she proved that she might be knocked up but nothing can knock her down. The image features the Formation singer in a completely different avatar and by that, I mean her old, badass self.

The black and white image where Beyoncé can be seen donning a white dress as she flips the bird. What makes it even more badass is the top hat lowered down to her nose giving Beyoncé a Charlie’s Angle-ish vibe.

The image is proof that the Grammys defeat has not managed to bring her spirits down. Recently, the 35-year-old singer lost to rival Adele for the coveted Album of the Year award at the 59th Annual Grammy Awards.

Even after receiving nine nominations, the highest for this year, Beyoncé only managed to take away two golden gramophones. Her highly political and empathetic album Lemonade created a lot of buzz and the Beyhive was certain that their Queen would most definitely take the cake this year.

We would like to share our love and happiness. We have been blessed two times over. We are incredibly grateful that our family will be growing by two, and we thank you for your well wishes. – The Carters

The Queen of the hive is currently pregnant with twins and looks for glorious than ever. She and her husband Jay Z and were both very excited when they first got the news and Beyoncé kept it a secret for months until she started to show. She declared her pregnancy to the world in an Instagram post mere days before the Grammys, where she was scheduled to perform. 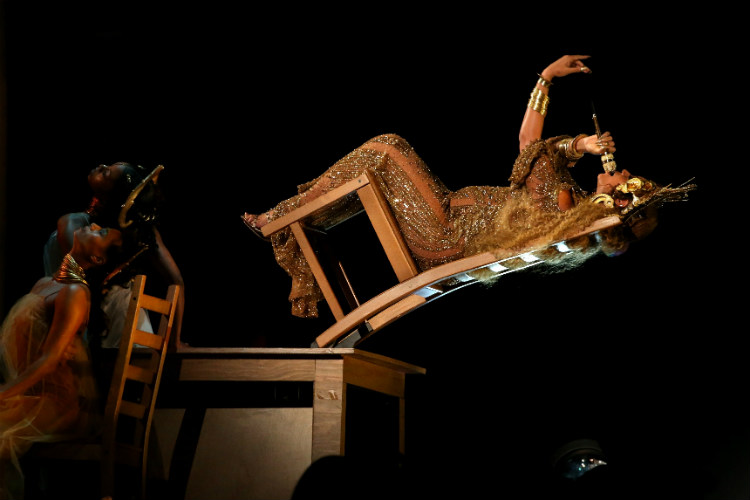 While she performed, Beyoncé looked completely ethereal in her golden attire as and Love Drought and Sandcastles from her album Lemonade. She even managed to pull off a gravity-defying stunt with a chair without missing even a single beat! Wow! Now, that’s truly bold.