Twenty-six years ago, the streets of India saw a revolution in the form of a blackened poster. Sharon Stone’s provocative pose with Michael Douglas in the posters of Paul Verhoeven’s Basic Instinct raised many an eyebrow, but the newly-liberalised India was in the mood to experiment. Thus, Sharon Stone, her bare shoulders now modestly covered with black paint, stared at you from behind Michael’s (blackened) shoulders from most street corners of the city.

Essayed by Sharon Stone, Catherine Tramell was the main antagonist of the movie who engaged in unusual sex acts with her victims before brutally murdering them with an ice pick. The movie also featured Michael Douglas who played the role of detective Nick Kurran, the love interest of Tramell.

Despite its graphic and sexually explicit content and strong opposition from offended LGBTQ communities, Basic Instinct got the cash registers ringing and grossed $352,927,224 worldwide. The movie also became the ninth highest grossing domestic movie of the year.

So, while we look back and reminisce the best moments from one of the most intriguing crime-thrillers of all time, let’s have a look at some its most enthralling facts.

1. The script of Basic Instinct was sold for a whopping amount 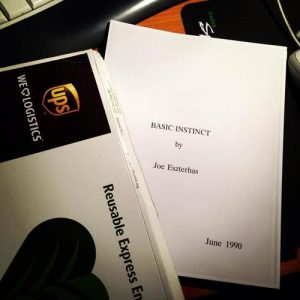 Joe Eszterhas—the writer of Basic Instinct—sold his script to Mario Kassar, the executive producer, for $3 Million dollars in 1992. Interestingly, it took Joe just 13 days to write that script. 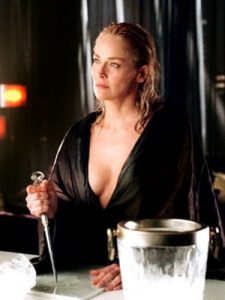 In an interview, Sharon shared that doing the violent ice pick scene demanded more resilience than shooting for sexually explicit part of the movie. “I made my best friend lie by the bed while I did the scene—just lie there by the camera telling me jokes,” said Sharon in an interview with Playboy.

3. The famous leg-crossing scene was not a part of the script 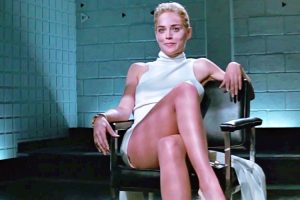 Sharon Stone’s interrogation scene, where she was seen crossing and uncrossing her legs, became the most paused in scene in the history of movies, for obvious reasons. However, what’s interesting to note is the fact that the flesh-flashing scene was not a part of the script written by Joe Eszterhas.

4.The lead actors of the movie did not feel comfortable around each other 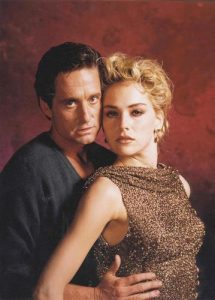 Stone and Douglas’s impeccable chemistry in the steamy scenes of Basic Instinct might make this revelation a little unbelievable. But, the fact, which was revealed by Stone in an interview, remains that lead actors of the movie did not share a very cherishable camaraderie.

5. Sharon Stone was not the first choice for the movie 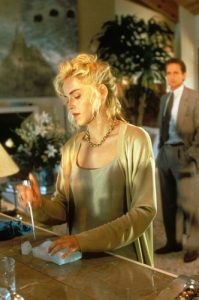 Before Sharon Stone, 13 actresses were considered for Catherine’s part because the lead actor, Michael Douglas wanted a big name to be associated with the movie. He insisted on having actresses like Julia Roberts play the role of Catherine. But for reasons too obvious, no popular actress took up the part. That is when Stone was roped in to play the part. 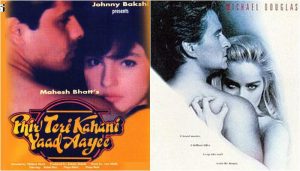 The poster of Rahul Roy and Pooja Bhatt starrer Phir Teri Kahani Yaad Aayi looked inspired by the poster of Basic Instinct, and the resemblance was uncanny. The striking similarity in the posters even made Columbia studio send a letter of protest to Mahesh Bhatt.