In last 100 years of Indian Cinema, there are very actors in Bollywood who could match the style and persona of Dev Anand . Known for his inimitable style and killer looks, Dev Anand left behind a rich legacy of films across different genres. In a career spanning over six decades, the actor essayed leading roles in several films such as ‘CID’, ‘Paying Guest’, ‘Hum Dono’, ‘Guide’, ‘Jewel Thief’, ‘Johny Mera Naam’ and ‘Hare Rama Hare Krishna’ among many others. The yesteryear star also went on to become a style icon with his scarves, mufflers and jackets and his signature puff. Also famous for his fast dialogue delivery and a penchant for nodding while speaking, the charismatic was not only  remembered for his work but also as a man full of energy and optimism. 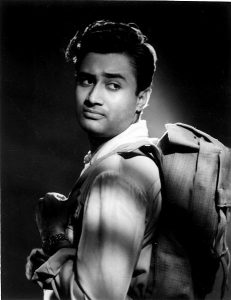 Born on 26 September 1923 in Punjab’s Gurdaspur, Dev Anand’s early did his schooling from Sacred Heart School, Dalhousie, (then in Punjab) before going to Dharmsala for further study. Later he moved to Lahore and pursued Bachelor in Arts in English Literature from the Government College. It was in early 40s, Dev Anand left for Bombay to try his luck in films. Dev Anand decided to become an actor after watching Ashok Kumar’s performance in Achhut Kanya. He got his first break in Hum Ek Hain, a film based on communal harmony. Soon, Dev and singer-actress Suraiya were paired together and they gave several hits Vidya (1948), Jeet (1949), Shair (1949), Afsar (1950), Nili (1950). While most of us are aware of his success story, there is story that has caught the fancy of cinema lovers across different generation whether Dev Saheb was actually banned from wearing Black suit. Is there any truth to the story that girls would swoon and fall down when they saw him in black suit.

In his autobiography, Romancing With Life, Dev Anand called this story a ‘stupid myth’. 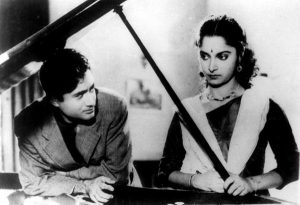 He wrote, “Kala Pani also gave the world a story about me that has been circulating amongst my fans ever since–that I am forbidded to wear black, for women swoon when they see me dressed in that colour. A stupid myth! But I went along with it, humouring my fans. The yarn, perhaps, originated from the fact that I wore black throughout Kala Pani. The father of the character I played was undergoing “kala-pani” a life sentence, for a crime he had never committed. And that son had sworn to himself that he’d always be dressed in black, symbolizing mourning, until the time he freed his innocent father from the clutches of the law.”

When noted film journalist Harneet Singh asked Dev Anand, “Was it true? Girls would fall down when they saw you in a black suit?.” To this this the actor looked at her, gave his signature smile and said “So I have heard”. 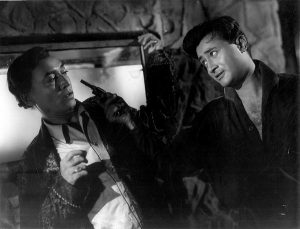 There is no recorded instance of girls really jumping off the terrace at the sight of Dev Anand in black suit and banning a person from what he or she wants to wear especially if it’s not inordinately obscene would be an infringement of a person’s fundamental right.