Anurag Kashyap has taken it to Facebook to clarify about his controversial tweets he posted a few days back. In his series of tweets, Kashyap mentioned how the film industry has become a soft target for haters and trollers around. While his explanation on Facebook seems clearly powerful, there appears a problem with his next post on the social media platform.

In his another Facebook post, Kashyap posted a screenshot of his conversation with a female journalist who was keen to take his statement on the elaborated post he just made. Criticising the media’s stance on the issue, the filmmaker captioned the post as “This is the media outside my house when I am not there… looking for headline”.

However, as soon as he realised the mistake, he deleted the post and it no more lies on Facebook. Here’s the screenshot that he posted. We have blurred the contact number and the photo of the journo. 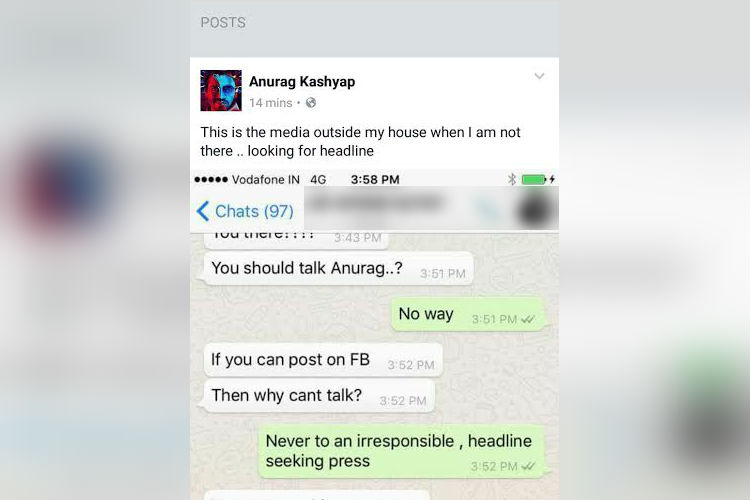 In the powerful post he wrote on Facebook prior this silly one, Anurag has said that his tweets never intended to ask PM Narendra Modi to apologise for his visit to Pakistan. But, only meant to extract justification of targeting film industry in the entire India vs Pakistan issue. Here’s an excerpt from his statement:

NO, Anurag Kashyap did not “ask the PM to apologise”( which most of the headlines would want you to believe, no one has their mind anyways) ,I merely questioned the fairness in judgement of a situation: the PM visited Pakistan for talks at the same time that a filmmaker was working with a Pakistani actor. Neither was aware of future events or mood. Yet only one pays the price. I’m also well aware that the government did not cry “BAN” or demand that Pakistani artists be sent back. Just as I’m aware that the PM himself doesn’t censor my films. But we elected them and so it is their responsibility to protect us from bullies – media or political parties.