Stand-up comic Utsav Chakraborty has almost been shunned by most in the stand-up comedy fraternity after sexual harassment allegations were levelled against him on Friday. Multiple women came out and shared their experience on Twitter, accusing the comedian of sending unsolicited pictures of genitals to women.

Comedy collective AIB, which has collaborated with Chakraborty for quite a few videos, has condemned Utsav’s alleged predatory behaviour with minor girls and has since de-listed videos featuring him on YouTube.

In a series of tweets since Thursday evening, Chakraborty put out a statement, that unfortunately did not contain the word ‘sorry’:

Chakraborty claimed his behaviour was a result of “one painkiller haze to another”.

How can I be a misogynist when I call it out constantly? Even if I was entitled I would think that life has been unfair to me, it gave me a disease without a cure. And I wouldn’t give it a second thought. I would go from one painkiller haze to another and keep messaging.

What’s been most hopeful and refreshing to see is bigwigs in the stand-up comedy scene condemn Chakraborty’s behaviour almost immediately and support Mahima Kukreja and others who came out with their story. Writer and stand-up comedian Varun Grover also tweeted, “Shameful, creepy, ugly behaviour by a fellow comic (Utsav/@Wootsaw). More stories coming out, all because @AGirlOfHerWords decided to speak out. Indian Comedy, like every other industry, needs a #TimesUp.”

Shameful, creepy, ugly behavior by a fellow comic (Utsav/@Wootsaw). More stories coming out, all because @AGirlOfHerWords decided to speak out. Indian Comedy, like every other industry, needs a #TimesUp. https://t.co/WpVGdQlvkZ

Abish Matthew tweeted, “Thank you @AGirlOfHerWords for braving it & bringing it out for everyone! Utsav’s behaviour is unacceptable & actions need to be taken for the same. I deeply feel sorry for everyone who went through this. Truly #TimesUp.”

Thank you @AGirlOfHerWords for braving it & bringing it out for everyone!

Utsav’s behaviour is unacceptable & actions need to be taken for the same.

I deeply feel sorry for everyone who went through this. 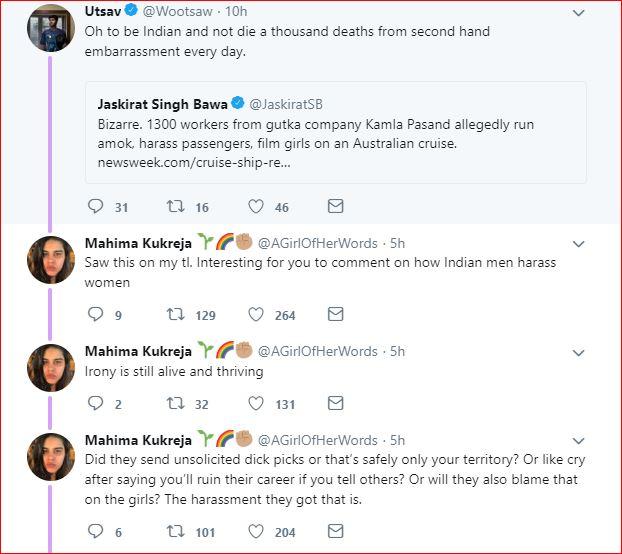 Minutes, after she accused Utsav of sexual misconduct, Kukreja’s inbox, was flooded with messages and screenshots from other young girls and women who shared their stories with her.

This is what Kukreja posted on Friday:

Please read this. Utsav kept asking a 17 year old girl, basically a child, to send pics of her breasts.
Also when she was interning at OML she told her bosses about Utsav and they did nothing. People knew.
She did not complete her internship.

My head is spinning. pic.twitter.com/qIA7MrnTX0

Chakraborty’s string of apologies went on till Friday, but the inconsistency in his apology angered a lot of people.

You’re still playing the victim here! Get off vomiting on twitter and go to a psychiatrist! And if you’re really sorry for what you’ve done, go to the police station nearest to you, admit your acts and ask to be punished.

Real simple. You are not the victim – get that clear. Apologise. Don’t harass. Don’t blackmail. Respect and understand consent.

Maybe bring justice to other girls who have been abused over the course of time by bringing out people you know who have committed similiar mistakes and you have overlooked or may have laughed off and passed by . That will encourage more victims and discourage filths like you.

YOU ARE NOT THE VICTIM. YOU ARE THE ONE ACCUSED OF SEXUAL HARASSMENT.