What if Deadpool AKA the “merc with the mouth” had a samosa chat craving? What if he related to your ever-persistent problem of not having enough change and being handed a few eclairs instead? A ‘Desi Deadpool’ from Lahore does all this and more.

A local Pakistani venture, SK Productions, first released an 8-minute video on the mercenary’s escapades in the Walled City in 2016, which has 134,799 views on YouTube, The Express Tribune reports. Three years later, the masked crusader has come back, but now with a more mellow lifestyle as he goes around being touristy and taking pictures with his fans. At the time of writing, the video, posted on the Facebook page DablewTee, has over 1,000 shares.

This is how ‘Desi Deadpool’s’ fans reacted to his comeback: 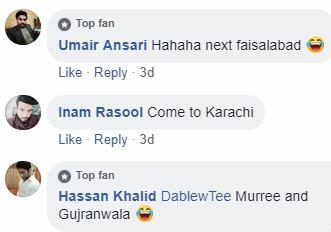 Unlike in 2016, when the ‘Desi Deadpool’ was more of a ‘vigilante’, the new video shows him breaking the law more often as he indulges in vandalism and urinates on walls. “Goli maar ke tujhe aise nachata, aik hath me katana, dusre me paratha. Saare log apni khidkiyan band kar, Hollywood se aaya Pakistan ke wo andar, Marvel ka sabse sexy mast qalandar,” goes the lyrics to this Deadpool’s soundtrack.

The travel bug may have bitten this desi Deadpool, as a question pops up to the very end of the video: Where should Deadpool go next?