Like industries around the world, even film industries have felt the heat of the COVID-19 pandemic in the last few weeks. Tentpoles like James Bond: No Time To Die and Black Widow have rescheduled their initial release dates of April, 2020. Meanwhile in Bollywood, Rohit Shetty’s Sooryavanshi, a film that could kick-start arguably Hindi cinema’s first cinematic universe, has had to rethink its release date on 24th March. Touted as one of the bigger films of the year, Rohit Shetty’s film is now expected to be postponed by a minimum of four-six weeks, where it will have to find breathing space in an already packed calendar. 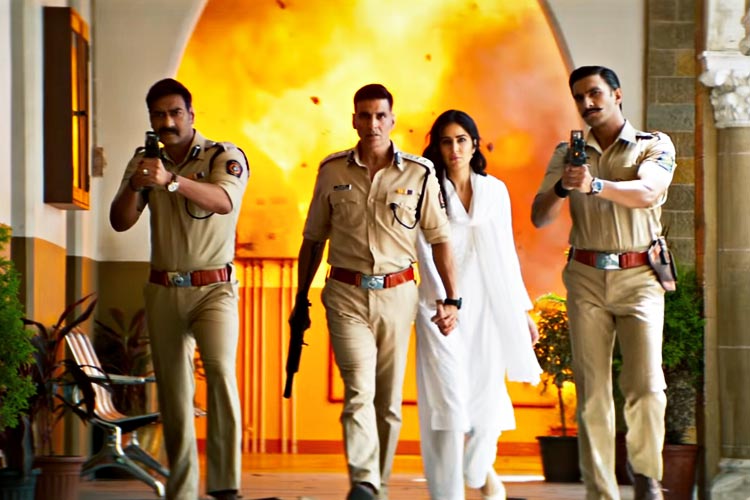 With reports claiming that the losses for Bollywood being around Rs 800 crore because of the delayed/crowded releases, the first casualties of this shutdown won’t be the likes of Rohit Shetty’s Sooryavanshi, but smaller films like Rohena Gera’s Sir and Dibakar Banerjee’s Sandeep Aur Pinky Faraar. Both these films were scheduled to release on March 20, after a lengthy struggle. Sir has been ‘in the pipeline’ since its premiere at the 2018 Cannes Film Festival. While Banerjee’s film has been ready for nearly a year, and kept on hold for an ‘opportune release date’. With March 20 out of the picture, it will be interesting to see they release in theatres at all.

The Big Guns!
Not even counting the ones from Marvel, Warner Bros’ Tenet or the new Bond film scheduled for November, the Hindi cinema calendar is ridiculously jam-packed with ‘event films’. Having adopted the ‘visual extravaganza’ look after looking at the successes of Baahubali and Padmaavat, like in 2019, we’re going to see a lot more of the green screen in 2020 as well. There’s Karan Malhotra’s Shamshera, starring Ranbir Kapoor, based on the exploits of a 17th century ‘good-natured’ thief. Much like Robin Hood. Akshay Kumar is going to ride his Kesari wave in this year’s Prithviraj. There are other big films too, like Shahid Kapoor-starrer Jersey, a remake of a Telugu film, that will surely have some distributors on their toes after the success of last year’s Kabir Singh. There’s Salman ‘Bhai’ Khan in and as Radhe, which is rumoured to be an origin story for his earlier hit film, Wanted. Akshay Kumar is playing the role of a man possessed by a female spirit in Laxmmi Bomb, based on a Tamil horror-comedy, Muni 2: Kanchana. Sanjay Leela Bhansali’s Gangubai Kathiawadi, starring Alia Bhatt, is also expected to be released around Diwali.

But two of the biggest releases of 2020 are expected to be Kabir Khan’s 83, based on India’s historic cricket world cup victory at Lord’s, and Ayan Mukerji’s Brahmastra. While the former will see Ranveer Singh don Kapil Dev’s avatar, it is Ranbir Kapoor’s superhero avatar in Brahmastra that has more people on the edge of their seats. And lest we forget, Aamir Khan’s Laal Singh Chadha, an official remake of Tom Hanks-starrer Forrest Gump, will be the year’s last release, where Khan will be hoping to reclaim his stripes as Hindi cinema’s Mr Perfection after a blip called Thugs of Hindostan.

The In-betweeners
Barring the big releases, Bollywood also has a lot of these mid-range films that could easily turn into one of the biggest/best films, like the recent years have shown us. Shoojit Sircar and Juhi Chaturvedi are teaming up again for Gulabo Sitabo, starring Ayushmann Khurrana and Amitabh Bachchan, something that has been described as Vicky Donor meets Piku. Khurrana’s hot-streak at the box office is mostly expected to continue with this film, which some are already touting to be one of the most profitable films of the year. There are the biopics like Gunjan Saxena and Shershah, both produced by Dharma Productions. Then there’s one on Shakuntala Devi starring Vidya Balan and Sanya Malhotra, tracing the journey of one of India’s most famous mathematicians.

Mahesh Bhatt is reported to make a comeback to the director’s chair after nearly two decades for Sadak 2, starring Sanjay Dutt, Pooja Bhatt, Aditya Roy Kapur and Alia Bhatt. There are also other films like Farhan Akhtar-starrer, Toofan, that will see him reteam with Bhaag Milkha Bhaag director Rakeysh Omprakash Mehra. And, YRF’s Bunty Aur Babli 2, which has the most interesting cast – Saif Ali Khan, Rani Mukerji, Siddhant Chaturvedi and newcomer Sharvari.

The ‘Dark Horses’
There are some films that might look like ‘lightweights’ on paper, but could spring a surprise on the audience. There’s Haseen Dilruba, starring Taapsee Pannu and Vikrant Massey, by the same director who brought us the quirky Hasee Toh Phasee. Anurag Basu’s Ludo, starring Abhishek Bachchan, has been riddled with production delays that are typical to any Basu film. There’s Rajkummar Rao, Varun Sharma and Janhvi Kapoor’s Roohi Afzana, directed by Hardik ‘Kaamyaab‘ Mehta, that seems to be designed along the lines of Stree. Also, Maqbool Khan’s Khaali Peeli, starring Ishaan Khatter and Ananya Panday, that is rumoured to be a thriller set in a single day/night much like Ek Chaalis Ki Last Local and/or Taxi No. 9211.

There’s a lot to be looked forward to, Bollywood fans… brace yourself.