Trust the good people of the Hindi film industry to make the act of getting a bail seem like a superhero feat.  On Saturday morning, Salman Khan’s bail plea was heard and after much argument, the actor was granted bail.

Before you could say Hum Saath Saath Hai  there was a queue of celebrities outside Galaxy apartment which read like the guest list of Koffee with Karan (Seasons 1 to 5).

ALSO READ: This 2015 Video of Pakistani Salman Khan is Breaking the Internet Again

Paying obeisance to the alpha member of the team is a done thing in most communities.

It’s but natural that members of the fraternity expressed their jubilation on the matter. Sonam Kapoor, took to Twitter to share a picture with her co-star from Prem Ratan Dhan Paayo with the caption – “You’re the best! Always by your side!” which could very well translate to “Call me the next time you’re playing Prem.”

You’re the best! Always by your side! pic.twitter.com/40GrtD4afU

From Varun Dhawan To Katrina Kaif , they were all there. Salman could very well have been a victorious emperor, back after conquering the world (in this case the Jodhpur prison which he shared with another upholder of Indian virtues, Asaram Bapu).

So heartwarming na? For Bollywood is tightly-knit industry which keeps standing up for each other’s causes.

Remember Padmaavat? When all of Bollywood’s biggest names came out in support to express their anger at a filmmaker being assaulted on his film-set, or their colleagues being showered with death threats and assault? No. Because all of these ‘celebrities’ used their platforms to steer away from controversies. Because ‘Do I need additional jhamela in my life? No. Activism gayi bhaad mein‘.

Remember the nepotism debate? The time when Kangana Ranaut received unanimous support from the bigwigs of the industry for calling out the crippling nepotism prevalent in the society? Arre Baba the same case where Saif Ali Khan did NOT write an incoherent rant explaining the concept of eugenics citing well-bred horses.

Bollywood has time and again proved that it will stand by issues that it believes in. See, how actors like John Abraham, Imran Khan or Jacqueline Fernandez, who claim to be animal activists, chose to stand by the thing that mattered to them the most- being in Bhai’s good books? Actually, not one of them spoke up on Salman’s case. Neither have they hailed the efforts of the Bishnoi community for doggedly pursuing the case for so long. But of course, a Sonakshi Sinha will celebrate her Godfather’s release with an Instagram post, and proudly call herself a ‘suraksha kavach’ (a forcefield) around the bechara, innocent Bhaijaan. 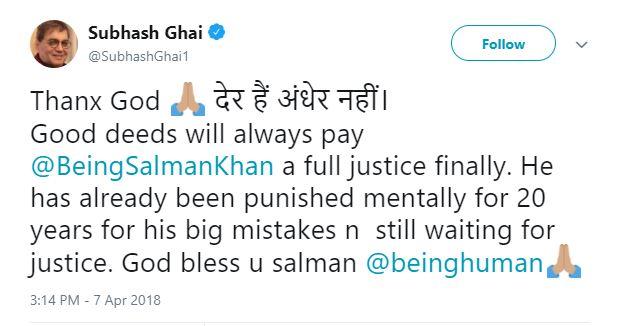 When the entire country was baying for Aamir Khan’s blood, for an out-of-context statement about the rising intolerance level in the country, the entire industry reached out to the man too.

Anupam Kher, who went on to organise a march insisting the entire intolerance debate is stuff worth a Bollywood script, was very eager to explain Aamir’s stand to the misinformed public. “Dear @aamir_khan. Did you ask Kiran which country would she like to move out to? Did you tell her that this country has made you AAMIR KHAN,” was one of the many questions he posed to Aamir on Twitter.

While actors from other countries actively take on the ruling administrations of their respective countries, it’s depressing that Bollywood continues to backslap each other and champion the cause of ‘good samaritans’ like a man accused of killing endangered animals. Maybe, it is these Bollywood stars who need to be reminded about ‘being human’ again.

With inputs from Premankur Biswas