Yo Yo Honey Singh is a popular Punjabi actor and singer. In a career spanning more than a decade, he has crooned several chartbusters. Now, in spite of not being active for quite a long time, the 34-year-old musician is really popular on Facebook. And the extent of his stardom on this social media platform will leave you surprised.

An alumnus of Trinity School in the UK, Singh is known for having sung in Bollywood hits like Kick, Chennai Express, Yaariyan, The Shaukeens and others. He last crooned the track Aankhon Aankhon in the film Bhaag Johnny. As an actor, he appeared in films like The Xpose, Zorawar and will be seen in Aasha.

According to Facebook data analyser Social Bakers, Yo Yo Honey Singh is ahead of stalwarts like AR Rahman, Sonu Nigam, Arijit Singh in terms of Facebook popularity. The Angrezi Beat actor boasts of 3.04 crore fans followed by Shreya Ghoshal who stands at 2.83 crore fans. Academy Award-winning composer AR Rahman follows third with 2.28 crore followers whereas Sonu Nigam, who recently sparked controversy with his tweet on Azaan, has 1.89 crore admirers.

What would sound pleasant to the ears of Singh’s fans, the actor-singer is even ahead of veteran playback singer Lata Mangeshkar. She has 77.50 lakh followers on Facebook. 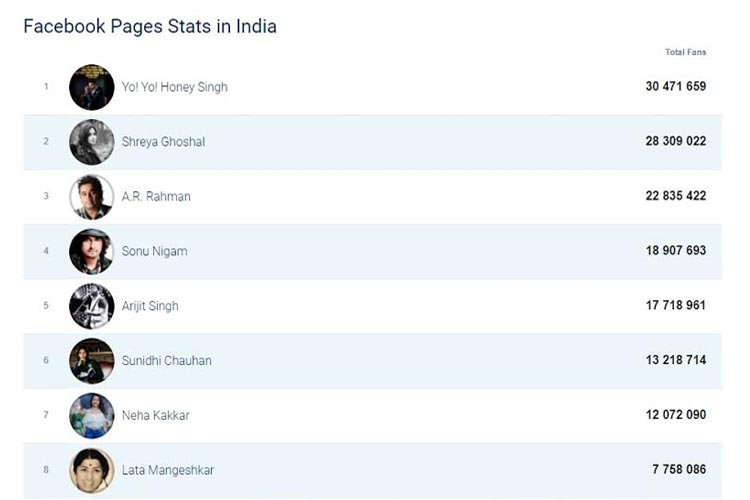 Yo Yo Honey Singh is the most popular singer on Facebook.

Also read: Now Yo Yo Honey Singh biopic. But are we ready for this?

Recently, there were reports that the singer was approached for a biopic. However, there has been no official confirmation made by him. As far as his popularity on Facebook is concerned, Yo Yo Honey Singh has more than 32 lakh followers from Pakistan and close to 19 lakh fans from Bangladesh adore him.

Last year, Singh had shocked the music fraternity with a startling revelation that he was battling alcoholism. He said that his fans deserved to know what he was going through in his life.