Pop sensation Justin Bieber’s maiden India concert turned out to be a huge success and the singer made his fans go crazy by performing live on his chartbuster numbers. Justin Bieber took the center stage at the DY Patil Stadium in Mumbai last night and made it memorable for all the Beliebers in India.

The concert was attended by around 45000 people, including many of the Bollywood celebs like Alia Bhatt, Jacqueline Fernandez, Malaika Arora, Sonali Bendre and Arjun Rampal among other. While many of them had a gala time at the concert, others just felt it was hyped.

In fact, Justin Bieber’s concert has many great moments, including the one where he performed his popular song ‘Sorry’ by waving the India’s flag. But it looks like not everybody is happy with the Justin Bieber concert and have their own list of all the pros and cons. And the most recent one is Justin Bieber’s lip sync act, for which the singer is being trolled mercilessly on the social media. 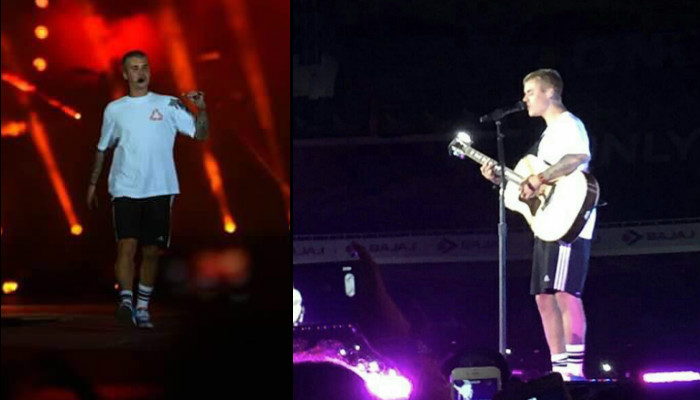 While many called it a waste of money and said that he couldn’t even get the lip sync right, we think it is not cool to mock the singer as a majority of artists do so. Lip syncing songs is a very old tradition in the Indian entertainment industry and our own artists follow it religiously, so if Bieber is doing it and that too only for a few songs, what is wrong in it?

Yes, we do understand that people paid their hard earned money for the Justin Bieber concert, but imagine, how can we expect a person to perform straight for 2 hours that too when he is not just singing but putting up a whole act for you to get the most of it. We need to understand that it was more of a visual treat. So guys let’s not be judgemental, at least for once!

But in case you want to have some fun, you can read these hilarious Twitter reactions for Justin’s lip sync fiasco:

Bhai, Justin Bieber gaana gaya hai ya nahi ?
All I could see is lip sync. #JustinBieberIndia

Came down from Goa just to see @justinbieber play his songs off YouTube. Couldn’t even get the lip sync right #JustinBieberIndia

You paid 70k for a concert just to see Justin Bieber do lip sync? With that money KRK wud have come to your house & danced for Beat pe Booty

@HrishiKay @justinbieber why do singers lipsync instead of singing? May be only rock can rock on live stage and rest diff to perform live!

21-Gun salute to all those who spent 50k+ to see Justin Bieber lip sync.