Ranbir Kapoor’s latest release, Jagga Jasoos has received mixed reviews from the critics. An Anurag Basu film, Jagga Jasoos also features Katrina Kaif and Saswata Chatterjee in pivotal roles. Ranbir was in town two days before the release of the film for the promotions. The actor who is also busy with the shooting of Sanjay Dutt biopic, being helmed by Rajkumar Hirani, interacted with InUth in an exclusive interview. While he chatted about many other things apart from his film and what’s in store for the audience, a special something caught my eye.

The Kapoor scion is one of the most sought after actors in the industry today. Needless to mention he is the heartthrob of many millennials. And he is also someone who never minces with his words while speaking. He answers every question with a lot of warmth. But, he doesn’t look into your eyes while talking. And I am not the only one to have observed it.

This journo mentioned the same briefly in his interview: 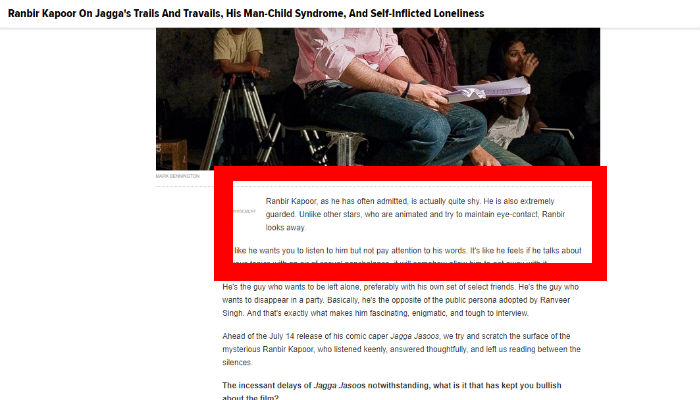 A text clip of Ranbir Kapoor’s interview with Huff Post

This video is also another proof:

In fact, this video too…

I was not aware of this fact but when I went to interview him, I observed the same. Unlike most actors, Ranbir seems all the more invested in his words. Probably that’s the reason he doesn’t pay enough attention to the person he’s talking to but to what the person is asking him.

The other actors like Shah Rukh Khan, Salman Khan or for that matter the actors of his league like Varun Dhawan, Ranveer Singh among others make sure they address the person by looking at him/ her. They try and make the person involved in their conversations. Ranbir, on the other hand, seems more interested in what he’s talking about rather than who he’s talking to. He doesn’t want to come across as somebody who speaks well but somebody who makes sense when he speaks. And all his words convey emotions. May be that’s what makes him such a good actor.

He speaks to express, not to impress.