Having been honoured with the Critic’s Award For Best Actor at the 62nd Filmfare Awards 2017,—which he shared with Manoj Bajpayee—Shahid Kapoor took to Instagram to share his happiness. In the picture, the Sasha of B-Town was seen donning a navy asymmetrical kurta and smiling straight into your eyes while clutching the stunning black lady with both his hands—the picture showing a perfect portrayal of his benevolence and authority.

Yeah, I know. I know that you wanted to be the first of the lot to congratulate the sweet and sexy actor on his big win, but it was his Padmavati co-star Deepika Padukone that won the race. And man, she raced past us in style!

“Congratulations,” she commented on the actor’s post. A few seconds later—perhaps, unable to resist the dapper look of Shahid—she wrote again, “I love you.” Well, showers of love continued from the other end as well. “Thank you and loads of love back at you,” he replied to the Bollywood queen. 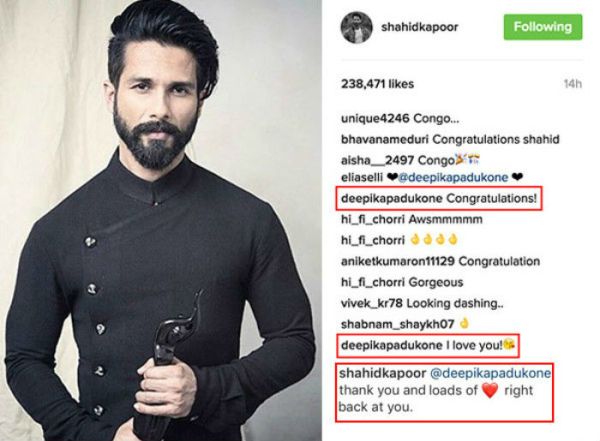 These days, Shahid is gearing up for the release of his film Rangoon. In another Instagram post, Shahid left many hearts racing by sharing his shirtless picture where he was seen flaunting his body on a beach.

“My character has a lot of close-ups, body shots,” the Haider actor had earlier said while revealing that there are many shots in Padmavati where he’ll be seen shirtless.