In a time where most mainstream Hindi films evade contemporary issues, walk around egg-shells while depicting their political leanings and oversimplify ‘solutions’ for social evils – Article 15 is quite… out there. It has noble intentions and a disarming directness. Like the arguments of that earnest friend who almost always is the oddball of the group.

Unfurling like a police procedural around the murder of two teenage girls in rural Uttar Pradesh, the film thrills (like David Fincher’s Se7en and HBO’s True Detective) while sensitising us on caste-based issues. 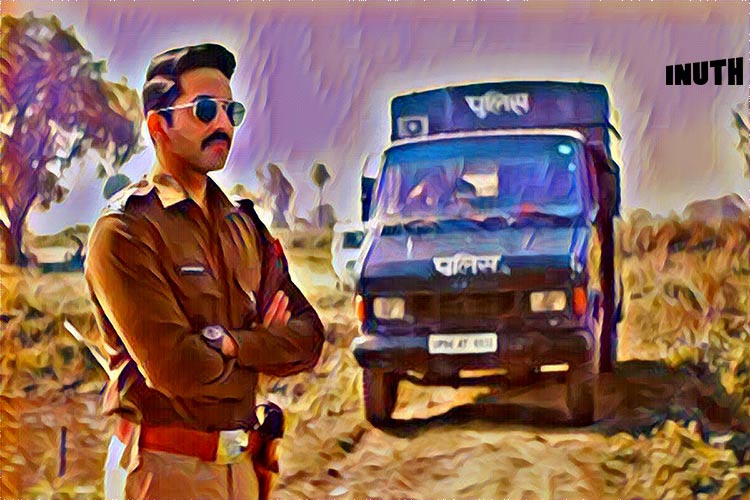 But it also makes Ayushmann Khurrana seem like a lesser actor, given how perfectly he fits into the mould of the ‘outsider/saviour’, almost to a fault. This shortcoming is most apparent in a scene where we see Mohammed Zeeshan Ayyub’s Nishad (a character modelled on Bhim Army Chief, Chandrashekhar Azad) has a breakdown. Realising he’s going to be jailed soon for protesting against a political alliance, he breaks down in front of his former lover, Gaura (Sayani Gupta). “We didn’t even sit next to a river for 15 minutes, or stare at the moon…” – the poet in him mourning the revolutionary.

It’s at this exact moment, that one might think that director Sinha missed a trick by not choosing to tell the story from the point of view of the oppressed. While being a perfectly watchable film otherwise, Article 15 isn’t quite nearly as harrowing as it should have been. Thanks to the film’s sleek production, we’re always watching from behind the protagonist. There’s safe distance, always.

Khurrana is a solid actor and he rarely looks out of place, which is why it’s something the director immediately addresses in his protagonist’s introduction. He is in a dusty village, but his shirt is crisp, his hair perfectly-combed. The villagers gape at him. “They’re looking at me like I’m some Britisher”, Khurrana’s character Ayan Ranjan writes in a text message to his wife, Aditi (Isha Talwar). To which his wife responds with – “welcome to the page 7 of a newspaper, Lord Mountbatten.” This awareness, while smart, ends right there. There are repeated mentions of Ayan Ranjan having just returned from London, which begins to sound like an excuse.

Ayyub’s Nishad, on the other hand, cannot stop thinking about issues plaguing his village. He’s disillusioned with the system, and therefore chooses to voice his opinions through WhatsApp and Facebook. “After a point, I realised that the power-hungry are a jaat (race) unto themselves” – Nishad tells Ayan. Often accused by his counterparts for zyada padhayi likhaayi kar liye, Nishad has perhaps too much of a conscience. During his vulnerable admission to Gaura, he recounts how he used to feel guilty for smiling at her, fully aware of all the problems tormenting his community/caste/class.

In spite of having significantly more screen-time, Khurrana’s Ayan Ranjan isn’t explored as much. He calls his wife to tell her about the horrors he’s witnessed, and says something about ‘un-messing’ it. When he’s confronting a colleague for his misdeeds, there’s a calibrated poise to him, something that has worked wonders in the Khurrana’s previous films. However, in a film that plays to the gallery quite often, Khurrana had to probably dial it up in a few more scenes. For someone who carries Jawaharlal Nehru’s Discovery Of India and the Constitution of India with himself, Khurrana’s Ayan Ranjan comes off looking like a ‘hero’ in pursuit of his fairy tale. The director wants to reflect urban India’s stark indifference through Khurrana’s character, but how long can one accommodate his fish-out-of-water syndrome?

In his bid, to deliver a wholesome issued-based masala film, Sinha cushions his protagonist with an impeccable supporting cast. Delivering a second successive winner after Mulk, Manoj Pahwa is stunning as the weary cop in the hinterland, ably supported by Kumud Mishra who plays a constable. Sayani Gupta’s performance is the equivalent of a muffled scream, where we can read her pointed questions in her eyes. Among such fine actors, Khurrana comes off looking oddly naive and spurred into idealism without much at stake.

As a result, Article 15 doesn’t feel as gut-wrenching as it probably should have. The film doesn’t tax our minds all that much, we aren’t grieving Dalit oppression at the end of the film, because the white knight (Mr. Ayushmann Khurrana) breaks bread with his subordinates and tells us, all is well. Is it really?