Shah Rukh Khan’s white shirt is lathered with blood as he chases Dalip Tahil’s Madan Chopra through an abandoned fort, with a knife in his hand. He will drop it only after being given his maa ka vaasta by the friendly cop, and by now Dalip Tahil has managed to pull out a steel rod and stab Shah Rukh Khan, through and through. More blood oozes in this Baazigar climax and is predictably followed by the villain’s evil laughter. Here’s where Abbas-Mustan’s film scored over the other films from that time, when a gravely injured Shah Rukh Khan joins Tahil in that evil laughter.

It was Shah Rukh Khan’s light brown eyes, angry, blood-shot and deranged, that brought people up short. It became an introduction to his streak of anti-hero roles in films like Darr, Anjaam, Ram Jaane. The foundation for that iconic stutter (that became the stuff of pop-culture legends with his next release, Darr) was laid in this film. And in many ways, Khan’s Vicky Malhotra (or Ajay Sharma) remains his edgiest role in a career spanning nearly three decades. Nothing’s matched up to Khan’s intensity in this climax, the performances, the right amount of Bollywood manipulation and the scot-free violence.

It’s interesting to want to go back to the making of that climax, is because we actually hear Abbas-Mustan describe how much Shah Rukh Khan added to it with his sheer breathlessness to land this character perfectly. In a decade when revenge sagas were the flavour and dying in maa ki godd (mother’s laps) was the parampara (tradition), Baazigar managed to infuse fresh life into the bone-tired formula of Hindi films. The sound design is of utmost importance here because we actually hear limbs break, glass shatter on a person’s face, the knife stabbing into flesh and the stunned silence before Khan echoes, “Ab sailaab aayega, Madan Chopra. Sailaab aayega.”

The director duo have been quoted in an interview, where they say how Khan was excited about all these scenes, and how he kept enthusiastically kept jumping/falling for the camera (giving them plenty of options to choose from). Khan insisted that no attempt be made to make the character ‘likeable’.

Despite his Dr Jekyll/Mr Hyde routine in the film, Khan somehow managed the impossible; of making the audience root for him in spite of bumping off at least four major characters in the story. That scene on the terrace is as shocking as it is, because how can the bespectacled Ajay *really* throw someone off a terrace? And yet, there’s that exact moment when we see the shy Ajay Sharma leave the body while the tormented teenager takes its place. A ‘hero’ could never do that to his leading lady, and yet the audience couldn’t hate Khan after he does the unspeakable. He creeped us out, but we still didn’t dislike him. 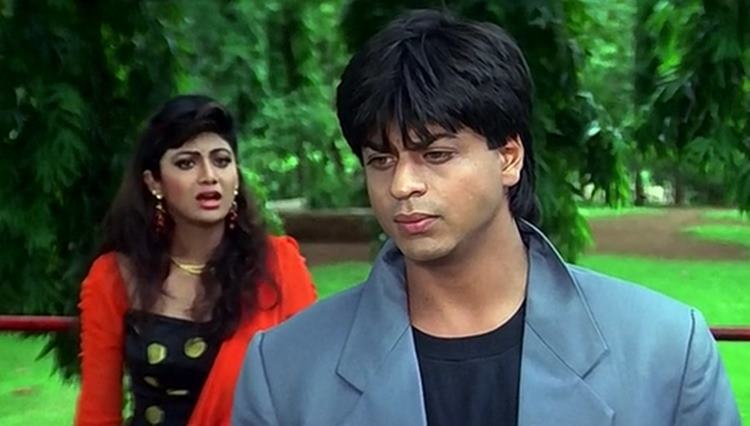 A still from Baazigar

Abbas Tyrewala is quoted in this Film Companion piece saying, “After Seema’s friend Anjali is murdered, SRK was required to do away with her photograph but instead of tearing it into pieces or chucking it away, he decided to swallow it.” He even mentions the scene where Khan is frantically supposed to look for his contact lenses in the toilet, where the actor risks looking silly while uprooting the pipe below the wash basin, adding a touch of realistic, scrambled panic to the scene.

This was Shah Rukh Khan before he was defeated by his dizzying heights of success. He danced with the energy of a million watts on top of trains, his radiant smile filled up the screen like in the songs of Yes Boss.

It’s not like Khan stopped taking risks, like we saw in films like Asoka, Kabhi Alvida Naa Kehna and more recently Raees… but somewhere Khan’s madness and his effusive charm seem to have been replaced by vain attempts to service an even bigger sense of self. As visible in the Zero trailer, Khan still doesn’t mind jumping out of a plane. But there’s a parachute protecting Khan’s ‘superstar sheen’, lest it crashes and burns. This fear permeates into the films through unnecessary romance tracks, songs and do a disservice to the original intent behind the film.

In that gory Baazigar climax, Shah Rukh Khan was both untouched and untouchable. Now, only if he can find a way to turn the clocks back again.