Vishal Bhardwaj’s film Rangoon that is all set to hit screens next week might not see a smooth release after all. Film production firm Wadia Movietone Pvt. Ltd. has filed a commercial suit against Vishal’s film for copyright infringement in the Bombay High Court. Wadia. The team from Wadia claimed that Kangana Ranaut’s character Julia is modeled on Mary Evans, an Australian stuntwoman who was famously known as Fearless Nadia.

A report in Mid-Day said it was Wadia Movietone which had the rights to Nadia’s scripts, story, and posters. The team from Wadia alleged that even the tagline ‘Bloody Hell!’ used by Kangana in the film were actually Nadia’s story. The production house alleged that everything from Nadia’s costumes and poses has been lifted by the team of Rangoon.

Roy Wadia, Managing Director of the firm said by doing so the makers of Rangoon want to cash in the popularity of Nadia, and that’s all.

Apparently, it was Roy who had approached UTV’s Ronnie Screwvala to do a film on Fearless Nadia. Back then the plan did not get a structure. Later, Roy learned that UTV was making a movie on similar lines with Vishal Bhardwaj. He then confronted the makers with it and told them rights to make a movie on Nadia belonged to him and a Russian firm. 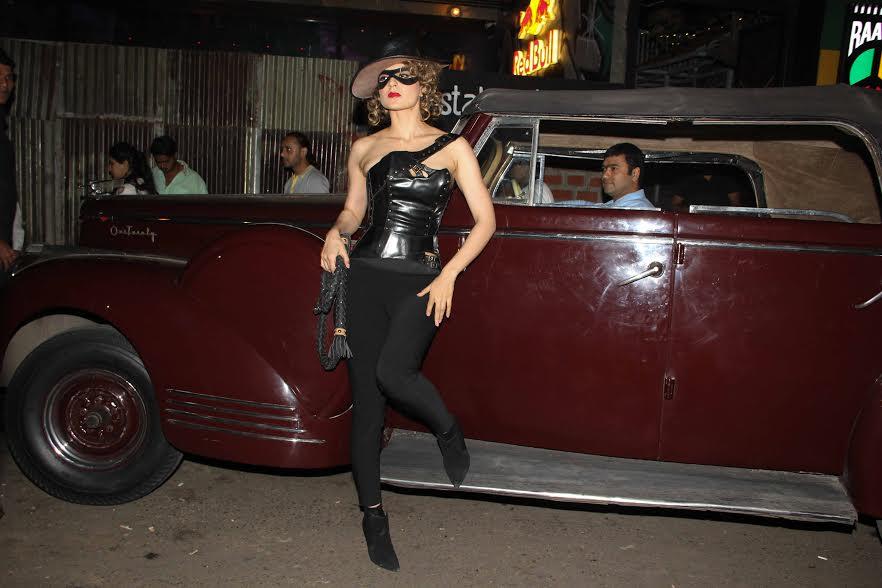 Roy then came to know about a film Rangoon being made, in which one of the characters was inspired from Nadia. The team then told him they weren’t making a movie on it. Post this incident, the Roy learned from media reports that the film was shelved.

However, when the trailer of Rangoon was released, Roy’s beliefs were somehow stamped. He saw how Kangana Ranaut’s character looked like Nadia. Roy’s legal representative Priyanka Khamani told Mid-day:

We have filed a commercial suit. The matter comes up for hearing on February 20.

The report also quoted a source as:

Kangana was advised to watch ‘Hunterwali’ [a famous 1935 Nadia stunt film], and the stylists told to reference her dressing for Kangana, who plays Julia. Some of the male characters also resemble those from Nadia’s life.

Apart from the looks, the love story of Julia is said to be close to Nadia’s real life. In Rangoon, a filmmaker Rusi Billimoria, played by Saif Ali Khan, fell in love with Julia. In real life, Nadia married producer Homi Wadia and was introduced to the movies by Wadia production house.