Actress Vidya Balan recently opened up about a disgusting experience she had in Mumbai local train during her student days on Neha Dhupia’s podcast. She recalled how a man boarded the ladies’ compartment of the train and masturbated at her when she asked him to leave.  She didn’t hold herself back while describing the situation. She said: “I was in the ladies’ compartment coming back from Xavier’s where I studied. Three of us friends. We were just sitting and chatting and suddenly I saw this guy get in and sit on the opposite side. He pulled his zip down and he started you know masturbating, shagging right there!”

Not one to take it without a fight, Balan says: “I had a writing pad or a file or something in my hand. I went and hit him and used Hindi cuss words to express my anger. I Pushed him towards the exit and then literally pushed him out of the train. I was enraged!”

Several news portals carried this bit of the show, as should have been reported. It takes a lot of courage on part of a woman to relive such a traumatic moment and share it with the world.  Coming from a feminist icon like Vidya Balan, who is known from making bold choices and breaking stereotypes, such narrations only give women the courage to fight back. But then when women speak about their fight against misogyny so unabashedly, a section of the society gang up against them and indulge in victim-shaming.

Sample these comments. They are taken from the comment section of a post shared by a news portal on the same incident. They range from being stupid to aggressively misogynist.

This gentleman thinks speaking about being sexually abused or harassed is something that women do for publicity.

Umm… this one has to be shared without any comment.

This man thinks that women must talk about such traumatic experience immediately after it has happened to them. If they wait for an hour, a day, a year, or even 10 years to muster the courage to talk about it, then they must be judged and shamed. Wow!

Since taking these screenshots was becoming a little too tiring, please take a look at all of them at one go. Judge for yourself, what kind of people sit in the comfort of their rooms and type out any nonsense about a highly accomplished woman just because she unabashedly described the harassment she went through at the hands of a man. 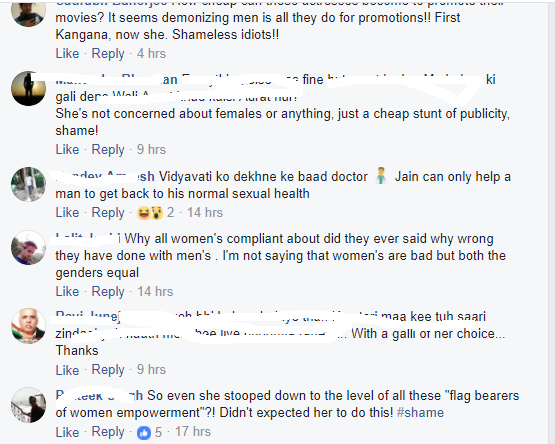