After veteran actors like Dilip Kumar, Amitabh Bachchan and rapper Yo Yo Honey Singh, veteran actress Farida Jalal has joined the league of actors who have become the victims of death hoaxes. One of the pages on Facebook spread a rumor about Farida Jalal’s death and shared the following image as an attachment: 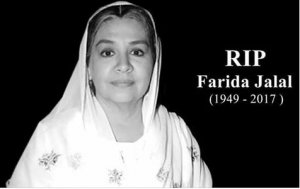 The image went viral on social media in no time and was shared by thousands of Facebook and Twitter users with condolences pouring in from the social media users who believed the hoax. Farida Jalal, when contacted issued a statement: “I am hale and hearty“, she said:

“I don’t know from where these baseless rumours are coming from. Initially I laughed, but from last 30 mins my phone have been constantly ringing and everybody is asking the same question. It’s a bit irritating, I wonder why people spread such rumours.”

Needless to say, the veteran actress was not pleased with rumors about her death. In the wake of veteran actor Om Puri’s death, the news of Farida Jalal’s death devastated some of the social media users.

Farida Jalal is alive and keeping well. She will soon be seen playing a prominent role of a Kashmiri woman in Imran Khan’s film “Sargoshiyan”.