It’s official! Varun Dhawan and Alia Bhatt will not share the stage with Canadian pop singer Justin Bieber during his May 10 concert in Mumbai. “There is nothing like that. Log kuch bhi likh dete hain (People write anything nowadays),” Varun told reporters at a press conference in New Delhi on Friday.

Varun was accompanied by Alia Bhatt as both of them are paired opposite each other in upcoming film Badrinath Ki Dulhania. The film’s director Shashank Khaitan was also present at the event organised for the promotions. Earlier, it was reported that both Alia and Varun along with their Student Of The Year co-star Sidharth Malhotra will share the stage with Bieber for the concert. During the event, Varun was asked whether his character Badrinath Bansal was inspired by Team India skipper Virat Kohli. He refuted the claims, but added that he is a fan of the star cricketer. 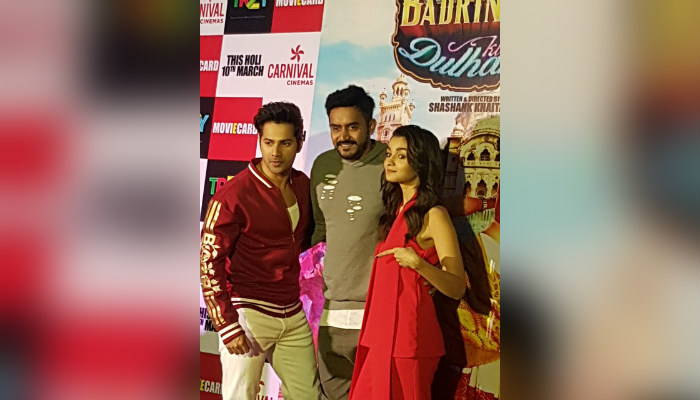 The reporters also asked Alia about the death threats she and her father received recently. She replied,”I won’t comment much on the threat. Both my father and the Mumbai Police have handled the issue well.” It should be noted that the man who threatened Mahesh Bhatt asking for a sum of Rs 50 lakh, was arrested from Uttar Pradesh.

Based in small-town India, Badrinath Ki Dulhania has Varun Dhawan playing Badrinath Bansal who falls in love with Vaidehi Trivedi essayed by Alia Bhatt. The film is touted to be a spin-off of 2014 release Humpty Sharma Ki Dulhania which was also helmed by Shashank Khaitan. The film hits the theatres on 10 March.