Tubelight teaser, featuring Salman Khan, Sohail Khan and Chinese actress Zhu Zhu, is here. The Kabir Khan directorial, which is produced by Salma Khan and Salman Khan himself under their banner, SKF Films adds to the existing curiosity around the film. The teaser shows a rather naive Salman trying to discover himself. The entire theme of the film is built around the relation between faith and tubelight, as Salman is heard in the background saying: “Faith is like a tubelight, it takes time to be lit but once it’s lit, it spreads light all over.”

The teaser also shows a Chinese kid, whom Salman had already introduced in his Twitter post earlier. As it appears from the trailer, both Salman and that kid bond really well. The story lies in the backdrop of independence struggle as you can see Gandhi ji making his way out in a crowd. What is also interesting is how Kabir Khan has utilised Tubelight to add curiosity in the teaser. There’s a constant chanting of ‘Jal ja, jal ja…‘ in the background by the kids.

The film, as it was also speculated, seems to be about a man’s journey in search of his brother. And the shoes, which we could also easily see in Tubelight’s poster, belongs to Sohail Khan, who plays Salman’s on screen brother.

While the teaser doesn’t give away much about the film, it appears as if Sohail plays the role of a soldier who goes missing after a war. And Salman, who seems to be like a child in a grown-up man’s body is too much fond of his brother. So when he doesn’t come back from the way, Salman starts his hunt for his loving brother. And Zhu Zhu, who can only be seen in two brief stills, seems to be playing a military officer. One can also see her dancing to a song wearing an Indian traditional suit.

Tubelight, which is this year’s big Eid release, is releasing on June 25. The film is being made on an emotional story, as told by the makers earlier. Nothing much, except Salman will also be seen donning a soldier’s avatar in the film, has been revealed. The film also features late Om Puri, TV actor Sahil Mehta, Shatrughan Sinha, Mohammed Zeeshan Ayub among others. 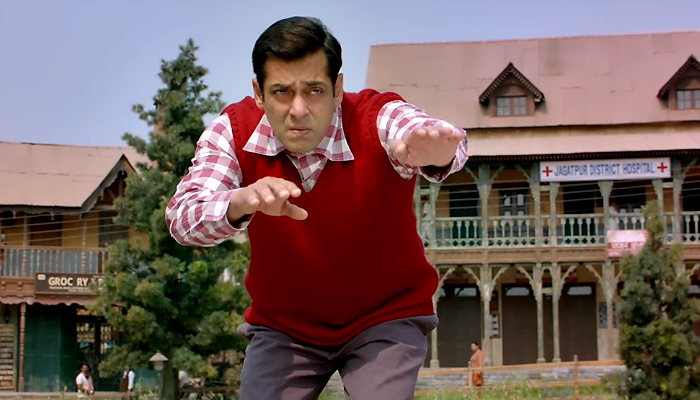 Kabir Khan had directed Salman Khan in films like Ek Thaa Tiger and Bajrangi Bhaijaan earlier. Both the films were Box Office hits. Even though the same kind of terrific Box Office opening is expected fro Tubelight, the team of the film has decided to not go too much heavy on the promotions. In fact recently, when a source close to the team was asked that why are they releasing the trailer so late, the person said because the makers don’t want to spend too much on promotion and are confident about their content.

The teaser was first launched on Star network with all the channels of the network running the teaser at 8:58 pm.