In what is definitely a surprising turn of events, Tubelight, the Salman Khan starrer is being marketed as a Shah Rukh Khan film in Brussels, Belgium. Apparently, since Shah Rukh Khan is more popular in the country, the distributors thought that marketing the movie on his name would attract footfalls. This is obviously surprising and we wonder what Shah Rukh Khan or Salman Khan will say when they learn about it?

Agreed that Shah Rukh Khan is doing a cameo in the movie, but making Tubelight his, is unfair on the part of distributors. The movie is solely Salman’s and tells his journey to find his brother who goes to war.

Check the clipping of the ticketing website which appeared in a newspaper: 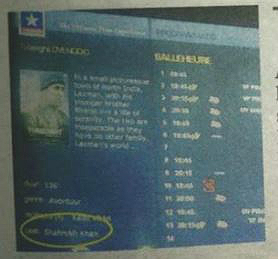 Also read: Eid success or not, Salman Khan’s Tubelight is a hit. Haters can back off

Tubelight, directed by Kabir Khan is set against the backdrop of Indo-Sino war of 1962. In the movie, Salman essayed the role of a slow-minded person. The movie opened to a cold response at the Box Office. This big Eid release of this year did not impress viewers and did not perform exceptionally well at the Box Office. Till Tuesday, Tubelight minted Rs 95 crore at the Box Office.

Now the theatre in Brussels selling tickets of Tubelight, in name of Shah Rukh, may be seen as a bid to gain more footfalls. The cameo of SRK in Salman was one of the highlights of the movie. Talking about his cameo, Shah Rukh Khan recently said he would not dare refuse Salman’s offer.

Also read: Sohail Khan just gave back to those who think Salman Khan’s career is over after Tubelight debacle

Tubelight got mixed reviews from critics. When Salman Khan was asked about it, he had said the movie will strike an emotional chord with viewers. He said, “This film is not of a kind which you watch with your buddies as you will not get an opportunity to dance or have fun. It is a very emotional film. Even an emotionless, stone hearted person will get tears in his eyes. So this is an emotional film to be seen with parents, grandparents, and the entire family.”