Gul Panag has become the latest Bollywood celebrity to be targeted by trolls. Not that haters need a reason to abuse celebrities, the reason why Gul Panag was trolled is extremely absurd. Gul, whose Instagram profile is quite lively, posted a picture in front of the poster of Messenger of God and wrote how she ‘loved’ the film. Even though she clearly mentioned the hashtag #sarcasm, many took the picture at its face value and started trolling her.

One of the commenters tried to educate Gul that the actor in MSG, Gurmeet Ram Rahim Singh, was a rape convict who was sentenced to 20 years of rigorous punishment. Another one abused her for being a ‘follower’. What all these mindless trolls failed to understand was that Gul was just being sarcastic about the entire thing. How could they really think that Gul was oblivious to the developments which took place just a few days ago? Of course, she knew that Gurmeet Ram Rahim had been convicted. But trolls have the habit of not thinking twice before abusing her.

Also read: Esha Gupta was called ‘kaali’ in her hot photos but she silenced the trolls in a classic way

But, Gul Panag is not someone who bows down to hate. She gave it back to them in the most classic way possible. Here is the picture she posted and the comments she received:

#throwback to the day I went to watch this wonderful work of art. #msg #messengerofgod #movie #godman #ramrahim #lovecharzer ( When @swatysmalik & @shuttercrazy ditched me…..) ** #sarcasm alert . Clearly many below have missed it.** 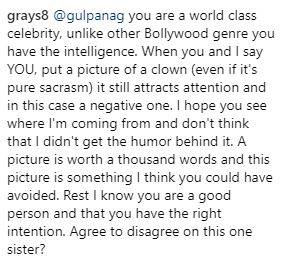 Gul Panag has done some really off-beat films in her career. Speaking about the kind of cinema she had done and would want to do, Gul Panag said:

I was very clear about the kind of cinema I wanted to do. And I have been fortunate to be able to have been able to make those choices because right around the time I did ‘Manorama Six Feet Under’ and ‘Dor’ I realized that these were the films ahead of their times…If I had to be a full time actor then I had to do other kind of films to survive.

Also read: Malaika Arora gave it back to trolls who accused her of ‘marrying a rich guy and divorcing him for alimony’