Why has the Hrithik Roshan-Kangana Ranaut feud captured our imagination in a way no other affair (in this case, alleged affair) has in the recent past? Are we a gossip obsessed country? Are we so celebrity obsessed that our stars and their alleged affairs make it to the primetime news? Perhaps, that would be too simplistic an explanation for the curiosity generated by the personal lives of these two talented and successful actors. It would be wrong to say that we are being driven by voyeurism when we talk about the Kangana-Hrithik issue with as much passion as we talk about demonetisation and GST.

On the face of it, Hrithik’s or Kangana’s myriad interviews or media reports boils down to three questions –

Did they have an affair?

Did Hrithik Roshan hack into Kangana’s emails and write hundreds of emails to himself?

Did Kangana stalk and harass Hrithik while pursuing him via email?

But we will be fooling ourselves if we really believed that we are invested in the personal battle of two high-profile individuals because we want the answer to these questions, which will neither pay our bills not affect our lives in any way. The stakes are far higher for the people invested in this saga than the truth of the matter.

So, what are the two narratives coming out of the many interviews that Hrithik and Kangana have given?

Narrative 1: A gullible outsider who became one of the most bankable female stars of her time in a male-dominated industry. A woman who has been through several ups and down in her career in addition to facing abusive men and bad relationships. She has been rejected and judged for her poor language skills, her talent never appreciated enough by the high and the mighty of the industry. Now, she is telling her story, to ensure that women are not treated like she has been and outsiders are not treated like she has been.

Interestingly, she slips in this narrative whenever she talks about an alleged relationship with a star, who refuses to acknowledge that they ever had an affair.

Narrative 2: A man – a successful star, divorced with two sons – can have flaws. He might have his weaknesses as is being accepted by him. But he too can be abused by a woman. He too can be a victim of harassment, stalking and false claimes by a woman.

Both the narratives are part of conversations of hedge groups and talking heads on social media. In fact, the second narrative is something that meninists or men rights activists thrive on — that men can be vulnerable and abused by a woman, that women often use loopholes in laws and use the gender card to their advantage. Narrative 2 gives much food for thought to the camp that has been fighting to repeal the anti-dowry Act and domestic violence act, as they claim men often fall victim to false claims by women.

Bollywood personalities like Farhan Akhtar, Dia Mirza, Yami Gautam and Sonam Kapoor have openly come out in support of Hrithik Roshan. No one from the industry has anything to say about Kangana Ranaut. The mix of people who have spoken out is interesting – Yami is an outsider, Farhan is seen as a feminist. Most of them have reiterated that it’s not a man vs woman issue. They have also said that sometimes the man can be a victim, even if he is someone like Hrithik Roshan.

It’s evident that the issue is not so much about establishing the truth as to who stalked whom or who hacked whom. It’s about rooting for the narrative we believe in and both parties are playing to the gallery to shape public perceptions based on these two narratives.

As of now, Kangana Ranaut is clearly losing the perception battle because she has apparently been “graceless” in her handling of the situation. Perhaps, what acted in Kangana’s favour earlier and people found cute and relatable, for eg her matter of fact expressions like- “tumhare baap ke paas to duniya bhar ka paisa”, has now turned against her. Kangana’s sister Rangoli has done irreversible damage to the actress’ image with her abusive tweets against Hrithik, calling him an “uncle” and a “creep” and dragging his ex-wife and children into the matter.

Is dat not u, who has grabbed Kangana’s waist like a creep and smelling her neck, who seems disinterested? @iHrithik pic.twitter.com/I7YrLrEg6C

In the name of dignity Hrithik released a sly ambiguous blog but simultaneously outraged a young girl’s modesty by releasing her pictures.

…he said he wants to be an example for his children, I want to know what do his sons think about their father’s obsession with his ex?

On the other hand, Hrithik’s carefully drafted Facebook post, his interviews which really don’t talk ill of Kangana – only refutes her allegations, and finally, his friends coming out in support of him – has helped him take a moral high ground. 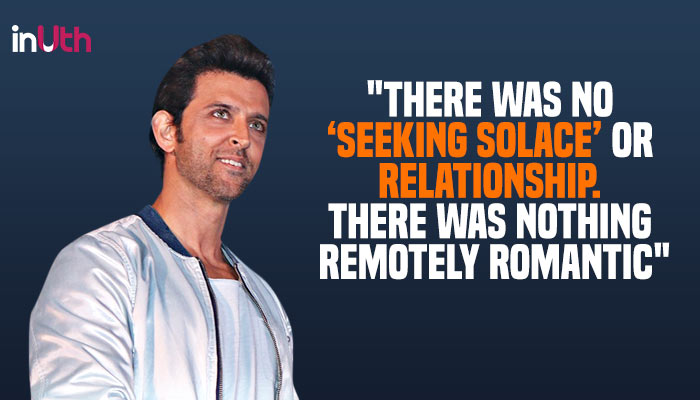 Also read: From Kangana Ranaut knocking on his door to Rangoli accusing him of emotional rape; 10 things Hrithik Roshan revealed

But to be honest, both have done equally damaging things to each other and have been equally vindictive, if one is allowed to use that word. Restraint has been the last thing on either’s mind.

It is a shame that everything that one party in an alleged relationship told the other one – innocuous details about her insecurities and her interactions with other people in the industry is in media’s possession. That material from a past relationship is being put to use in such nefarious ways. The emails about Deepika Padukone and Salman Khan or “physical relationship” with a certain RK needn’t have made it to gossip columns. Yet, they prove nothing about Hrithik’s allegations of stalking her and sending her sexually explicit messages. Then why are they in media’s possession? 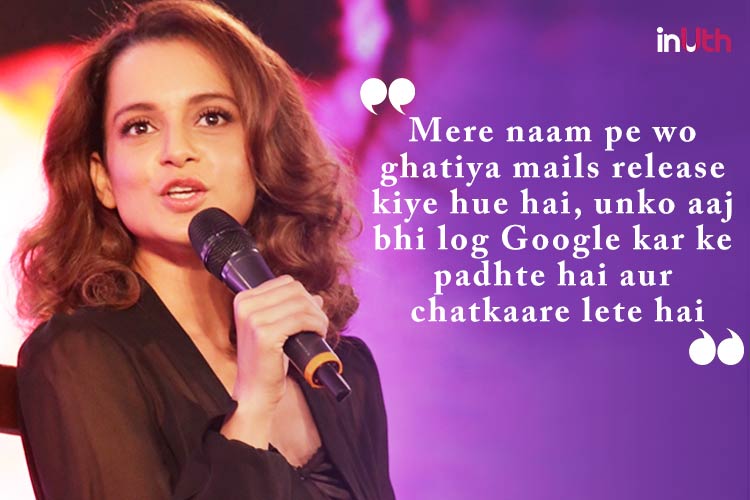 But can we really blame Hrithik for this?

How does Kangana want to be remembered?

Kangana gave a voice to all those women who have been accused of witchcraft. Shekhar Suman, Adhayayan Suman’s father, alleged Kangana destroyed his son’s career with witchcraft. Speaking about the allegations, Kangana had said:

Even in this new age, when we have to project our frustrations on a woman, the first thing we call her is daayan, chudail or whore or psychopath. The mentality is the same. If I can’t get you, I might just destroy you. People of our country are discussing about my periods and calling it gross. There is nothing gross about it. If your agenda is to shame me, it’s not happening. 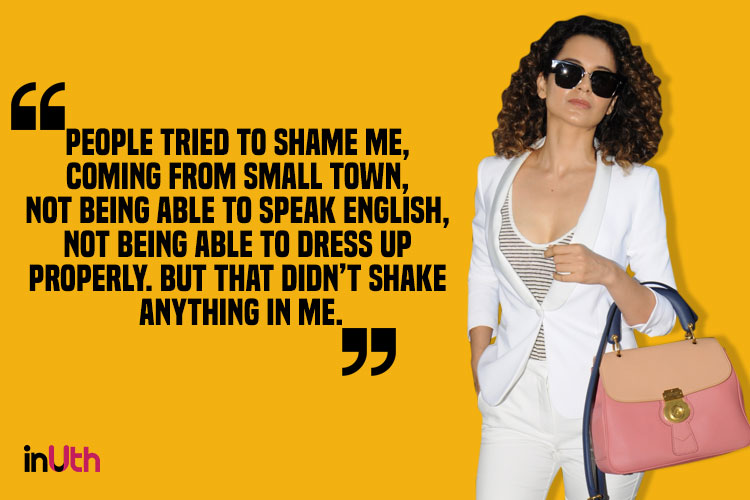 With films like Fashion, Queen and Tanu Weds Manu 2 to her credit she really doesn’t have to prove her worth to anyone. However, her tendency to make her point at the cost of others didn’t really hold her in good stead. When she was promoting Rangoon, what made news was her frequent fights with Shahid Kapoor. When Simran came close to release, all the promotional activity revolved around her affair with Hrithik Roshan. She kept talking about her relationship with Roshan, how she was destroyed by the affair and how the Roshans intimidated her, without any proof. That’s when people’s opinion about her started changing. Why would anyone want to use a public platform for a past relationship that didn’t work out?

Sometimes, individuals become more than their talent, their achievements and their personality. In Kangana’s case, she became a paragon of hope for outsiders, a poster girl for all small-town dreamers, and a woman pursuing excellence in an industry that loves to bask in the glory of its mediocrity and has never treated it’s women fairly. It’s sad that all her hard work and difficult choices have been reduced to content for tabloid journalism. 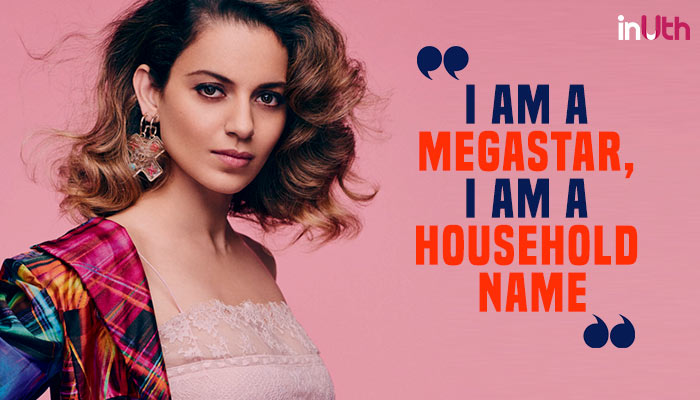 Also read: Why Kangana Ranaut’s message for ‘strong girls’ is an important reminder for every woman out there

A person’s legacy is shaped as much by the fights they choose to pick up, as much by the fights they choose to give up. But that’s the thing about strong-willed women — we, even her die-hard fans and well-wishers can’t control what she chooses to do. So, how will we remember our Queen? As a game-changer or a trouble-maker? Will we remember her for the great cinema (for which she will need films in her kitty) she leaves behind or a steaming scandal that Bollywood hasn’t seen for a long long time?

We can only hope, she bounces back with great performances and success, which has evaded her for some time now.

(With inputs from Shalini Ojha)