Rana Daggubati, who will be next seen in The Ghazi Attack is quite excited for the film. At a recent press interaction, he revealed that he agreed to do the movie because he felt the story was amazing. He added the film is a tribute to the Indian Navy and it was a story worth telling. In the film, Rana plays the role of  Lt. Commander Arjun Varma, who was said to have remained underwater for 18 days during the 1971 war.

But here is a little information about the film that you wouldn’t have guessed. Rana has bought a Bajaj V Bike made from the metal of indigenous aircraft carrier INS Vikrant as a memorabilia from the film. He said he has a penchant for bikes and is a deep sea diver himself. 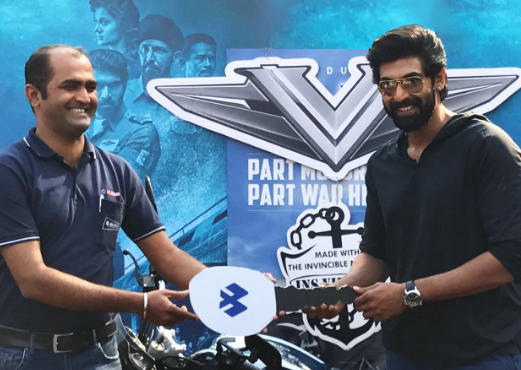 The Baahubali actor said he had been researching about how the incidents happened for the past one year. He said:

INS Vikrant was one of the most celebrated warships in the Indian naval fleet. I know the importance of it in those times. It’s lovely to be part of the entire thing.

The film is inspired by true events which occurred during the 1971 war. It reveals the unknown story of the how officers from the Indian navy stayed underwater and fought a war.

Apart from Rana, the film also features Taapsee Pannu, Kay Kay Menon, and Atul Kulkarni and is slated for a release on 17 February. The 32-year-old actor was lauded for his splendid performance as Bhallala Deva in magnum opus Baahubali. The sequel to this movie will release in April this year.