Om Raut’s Tanhaji: The Unsung Warrior believes in spelling things out for its audience. Therefore, when the film kicks off in Bharat in 1670, we see a tiny bird. Seconds later, an arrow rips through the bird and a voiceover (by Sanjay Mishra) tells us about how Bharat a.k.a sone ki chidiya (the golden bird) was attacked and looted by the ‘outsiders’, which is contemporary Bollywood’s shorthand for Muslims. However, the hideous costumes and the overall megalomania are left to a Rajput this time. Uday Bhan Singh (Saif Ali Khan) is the ‘cunning’ Mughal emperor’s (Luke Kenny) trusted aide to occupy the Kondhana (Sinhgad) fort.

Surrendered by Maratha king Shivaji (Sharad Kelkar) under a peace treaty, the fort is considered a vital strategic point for the Mughal empire to conquer the South. Shivaji is discussing ways to win it back, and then someone says, “there’s only one man who can do this impossible task”. Cue for the hero’s entry.

Tanhaji Malusare (Ajay Devgn), has been trained by his father into a one-of-a-kind warrior. His father leaves him a ‘debt’, one that requires him to take his ‘country back’ from the outsiders. He’s obsessed with the deity-like  Shivaji and a thirst of battle. He has noble intentions, because he offers to postpone his son’s wedding so he can lead his forces into the Battle of Kondhana. He’s a pious man, who invokes his fight for Shivaji’s Swaraj as the primary reason for his fight against ‘outsiders’. The term Swaraj (people’s rule) is thrown around like it was probably used by Bal Gangadhar Tilak during the pre-independence struggle. The film sees Tanhaji as a revolutionary of Hindurashtra, instead of a warrior taking on Aurangzeb. His pep talks include shaming villagers into submission about how they openly can’t chant ‘Jai Shri Ram’ with the Muslim rulers lording over them.

Om Raut’s film takes its central conflict of pitting ‘Us vs Them’ so seriously, that it even stops pretending about its overarching message… lest their target audience not find it ‘direct’ enough. Speaking Bhansali’s cinematic language from Padmaavat (like many others recent films), even this film’s colour palette is embarrassingly simplistic. One is adorned in white-and-maroon, because he has a wife and son to come back to. The other is black or green, even though he’s a Rajput, who tears meat with his teeth and abducts women he wishes to possess. One is a God-fearing Hindu, and the other is duplicity personified. “You can die for your motherland, and I can take lives…” – Uday Bhan tells Tanhaji without batting an eyelid. The distinction is stark to the point where the film constantly goads us to cheer Ajay Devgn taking on the devious ruler. 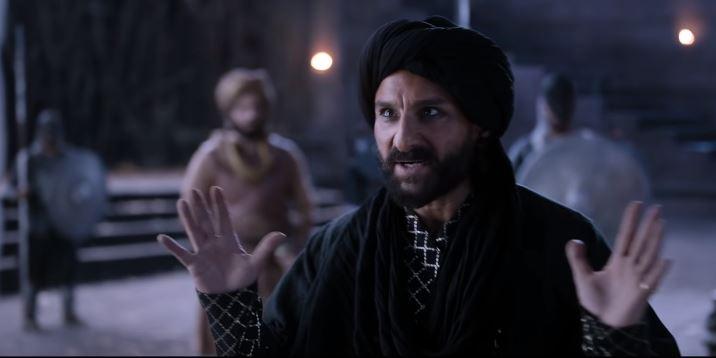 The Mughal emperor and his forces are ‘types’, who represent the wily nature of the outsiders. To the point, that *they* won’t allow Shivaji’s mother, Jijabai, (Padmavati Rao) to finish praying at the temple in Kondhana fort. As she’s being evicted, she looks longingly at the saffron flag waving on top of the temple. There’s enough emphasis on how she won’t put on footwear, until the saffron flag is mounted  back on the Kondhana fort.

Tanhaji Malusare will defeat (the Hindi idiom daant khatte kar denge is used) the Mughals, and reclaim swaraj from the ‘wicked’ outsiders. The irony here is… Ajay Devgn, the same man who stood for Hindu-Muslim unity in films like Zakhm, leads the Hindu agenda here. There is the  odd Muslim who fights for the Marathas, and the wicked Hindu who rats on Shivaji, but Raut’s film is fooling no one with tokenism like this.

Primarily built around a conflict featuring Hindu men, the women are relegated to the shadows. Tanhaji’s wife, Savitribai (played by Kajol) is seen in a string of scenes where she’s either seeing her husband off to war, or waiting for him to return. It seems like her character perpetually carries a puja ki thaali in the film, apart from equating a woman’s ghoonghat with a Brahmin thread (dubbed in the final film). Kamal (Neha Sharma), Uday Bhan’s love-interest, gets lesser screen-time than Devgn’s sword. As Bhansali exhibited with Priyanka Chopra’s role in Bajirao Mastani, it’s possible to write complex female roles if the gaze isn’t so indifferent.

Each time Tanhaji dances in the film,  it’s dedicated to the deities (Bhavani, Shiv). While Uday Bhan Singh, dancing to his merriment with the Mughal army, is supposed to ooze menace. After (rather unsuccessfully) inhabiting complex roles in recent films, Saif Ali Khan seems deliriously happy about this sure-shot blockbuster. His accent alternates between thick Rajasthani, and a Cambridge-educated Bond villain. Khan couldn’t be less-bothered about this one.

But then these would seem like fair complaints in a film that’s actually trying to pose characters beyond their one note, and reaching for a complex truth. Tanhaji: The Unsung Warrior is NOT that film. The contemporary bass-heavy background score hints at how this could have been a rather mythological adventure film, one that springs to life from the pages of Amar Chitra Katha.

Instead, it’s a paean to Hindu masculinity, one that showcases martyrdom in better light than it probably deserves, by adding religious motifs to… conventional warfare in the 17th century. Uday Bhan Singh, the Hindu proxy for the Mughal empire, is repeatedly compared to a serpent. The conch shell is blown when the ‘hero’ stabs the ‘villain’ in the heart, and the bhagwa (saffron flag) is mounted on top of a temple inside the Sinhgad fort, as if it were an epic conclusion to the dharm yudh.

Tanhaji: The Unsung Warrior is custom-made to appease the nation’s saffron obsession, something that might even make a 100 crore for Ajay Devgn at the box office. But when history looks back upon this chapter of Hindi films, Tanhaji: The Unsung Warrior will be seen for what it is – a petty vanity project that fanned the flames of communal divide purely to make a quick buck out of it.