Sunny Leone has been in the news ever since she and her husband Daniel Webber adopted an orphaned girl last month. The Child Adoption Resource Agency (CARA) today released a statement revealing that the girl, who hails from Latur district, was turned down by almost 11 families before being adopted by Sunny.

CARA’s CEO, Lt Col Deepak Kumar further stated:“Without looking at colour, background and health status, Sunny Leone happily took the child in adoption. We respect that they didn’t try to bend the rules and stood in the queue like all the other parents.”

Sunny had applied at CARA’s website for adoption last year in September and since Sunny and husband Daniel are Overseas Citizens of India, this child could only be referred to them after she wasn’t adopted by Indian nationals for more than two months. The child was finally referred to them on 21st June 2017.  They gladly waited in queue and accepted the 21-month-old baby girl within 48 hours. The child was then moved from Latur, Maharashta into foster care. Sunny and Daniel are still awaiting the final court decision that would declare them as the legal parents of the child. 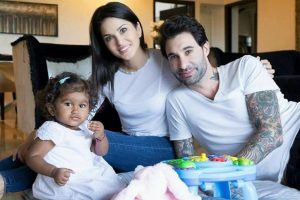 CARA’s CEO also stated that almost 60% of the children referred to foreign nationals were children with special needs and 90% of them were older than two years of age. This clearly indicates that domestic applicants preferably lookout for children who are young and who have a spotless medical history.

If you weren’t a Sunny Leone fan already, we’re pretty sure this heart-warming story just made you one. Well done, Sunny!