There’s an overwhelming opulence in Waaji, a fictitious city appearing in Saaho, that’s home to the world’s most dreaded gangsters. High ceilings, massive chairs, henchmen standing at every door, we see everyone smoking a cigar. Yes, everyone. Even the right-hand men of gangsters. Nearly every hand in sight is holding a glass of (what looks like) expensive whiskey. Inter-cut with shots of the sprawling skyline of Waaji, the VFX helicopters, the film’s lavish setting could give Sanjay Leela Bhansali an inferiority complex. However, then the characters begin to speak and the facade begins to crumble.

Director Sujeeth’s Saaho, starring Prabhas, wants to convince you that it is a cutting-edge ‘mass’ action-thriller. In reality, Saaho is a three-hour exercise in vanity. So overwhelmed is the film by the presence of Baahubali himself, that it shamelessly submits itself to the noble cause of showcasing the many skills of Mahishmati’s one true heir. The film, however, wasn’t quite content with Prabhas playing just one character, so they get him to play a cop, a thief AND a gangster. You can’t even call them twists because they are so feeble on logic. Yes, even masala logic.

The story just bulldozes past the many whys of the film, something a script supervisor would throw caution to. And it does so with the arrogance of an old school producer, laughing off the audience’s intellect.

Saaho‘s taken-for-granted approach is most glaring when Prabhas uses a Lamborghini as his getaway car on the streets of Mumbai. You might as well have put him in the Batmobile. Talking about the film’s lack of subtlety, Sujeeth’s Saaho doesn’t veer too far from the cinematic language of a Telugu mass film. The ominous score for Prabhas beating up fifty people in a set-piece is immediately (and almost jarringly) replaced with happy music, as soon as he sees Shraddha Kapoor. The henchmen sport peculiar hairdos, blue contact-lenses, horrendous tattoos. Nobody can miss the point that they are the ‘bad guys’. It’s also amazing to hear Prabhas use his baritone, marinading in a lifetime’s worth of casual sexism, to ask Shraddha Kapoor ‘what is a beautiful girl like you doing in the police force?’ Yes, even in 2019.

Having been the face of one of India’s biggest films and having taken about three years to come up with a film after 2017’s Baahubali: The Conclusion, one would expect Prabhas to put in a *tiny bit* of effort into his acting, even if only to justify his status as a ‘star’. What Prabhas does instead, is drag his way through the Hindi dialogues, his speech almost sounding like borderline slurring. When he’s not smouldering (not necessarily in the cool, angry-young-man way) with the film’s overenthusiastic background score, he’s awkwardly mouthing dialogues like “your shadow may leave you one day, but I won’t”. Lactose-intolerant members of the audience might want a cheesy alert. 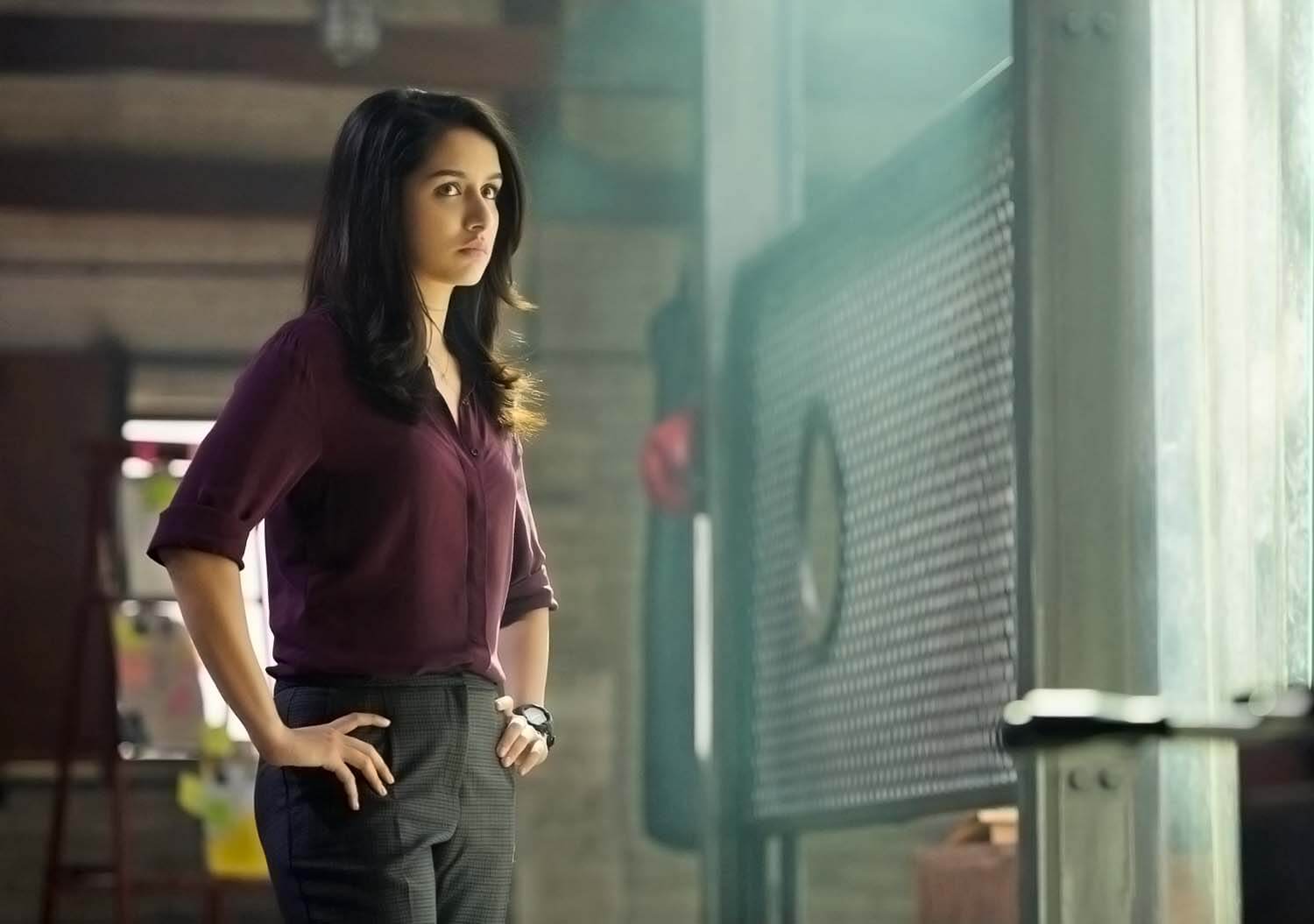 Shraddha Kapoor’s character, like most other heroine-roles written in mainstream cinema, exists purely to gape at the film’s leading man. With affection, with respect, with disbelief… and mostly with wide-eyed admiration. To the point that during a major reveal (not really) around the film’s interval point, Prabhas literally smirks and struts away… as she looks on. Maybe it’s not fully Shraddha Kapoor’s fault that she’s inundated with such lack-of-agency roles, but how much longer before she stops playing them like a mute spectator?

Sujeeth’s film is so bereft of original ideas, that he can’t even resist touching upon a few ‘homage scenes’ from popular action films. Before a key shootout scene, the TV accidentally plays a scene out of Terminator 2 with Arnold Schwarznegger saying ‘Get down!’ before unloading his shot-gun on T-1000. Right before Prabhas and Shraddha Kapoor are about to engage in a jugalbandi shoot-out, the TV channel switches to a scene from Mr & Mrs Smith. The film’s laborious climax takes place in a Mad Max: Fury Road setting, where the director even takes the liberty of borrowing the famous line from George Miller’s film – “it’s not his blood”. In a more competent film, one might even have excused how lazily these homages are weaved into the film, but in Saaho these ‘tributes’ look like they’re compensating for the filmmaker’s lack of imagination.

Saaho features a bunch of other actors like Jackie Shroff, Chunky Pandey, Mandira Bedi, Tinnu Anand, Mahesh Manjrekar, Neil Nitin Mukesh and some foreign-type characters with confused ethnicity. Someone is introduced as Mr Franco (apparently American surname?) who speaks in a Russian accent. Nevermind, this is nitpicking for a film that confuses convolution for depth, and green screen for ambition. There’s a scene where Neil Nitin Mukesh sends a hilarious text message to double agent Shraddha Kapoor – ‘are you still police?’ Can someone please text the team behind Saaho and ask, ‘is this still entertainment business?’