Do the rich still use cheque books? A rich man walks into a room with two henchmen (in tight black t-shirts) and throws a cheque book on the table and asks the keemat of {insert random, priceless object}. Is this 2018? Apparently, this still ‘works’ in the world of Deols and Yamla Pagla Deewana: Phir Se. This world resembles our own, but it surely exists in a parallel universe. In this world, Garam Dharam and his two sons (Sunny & Bobby) are the only ones that matter. They invoke the spirit of their respective eras for the purpose of nostalgia, and parody their most famous scenes/dialogues for the ‘entertainment’ of the masses. In other words, wring every last drop of their stardom to find relevance again.

In Yamla Pagla Deewana: Phir Se – we see Bobby parody his father’s iconic scene from Sholay, where he’s inebriated and speaks his heart out to the mohalle waalon. Dharmendra, someone in his swinging sixties, imagines apsaras around him and the Dreamgirl theme starts playing in the background. He also plies around in a bike with a sidecar (like the iconic Yeh Dosti song) and the Rafta Rafta Dekho Aankh Meri Ladi Hai plays thanks to a plug for Saregama Carvaan. Sunny is the kind, respectful ‘doctor’ who cures his mohallawallahs with his purkhon ke remedies. When he’s not putting his dhai-kilo-ka-haath on someone’s shoulder and intimidating them with words, he can be seen expressing rage by crushing steel glasses, and punching & damaging pillars. It’s one ode after another, one parody after another, and this is only the first half of the movie.

Navaniat Singh’s film seems to be stuck in a time capsule. This is make-believe filmmaking of the 1980s, where Punjabis are the drunk population and the Gujaratis are the ones who fuss over allowing ‘non-vegetarians and alcohol’ in their shuddh shakahari neighbourhoods. The culture clash is incidental, and has nothing in particular to add to the central conflict or the texture of the film. Where a character is named Kaala, only so that he go on a drunken tirade about how much he hates his own name and broadcast his bias for the colour. Where Dharmendra casually gives us a glimpse of his ‘old-school nature’ when he says, “ek aurat ke saamne kisi vakeel ki bhi nahi chalti“. The work is cut out for all three – Bobby is asked to summon his dancing skills from the duniya-haseeno-ka-mela days, Dharmendra is supposed to play the elderly womaniser with a dry sense of humour. Sunny shalt scream and whoop ass, when needed. 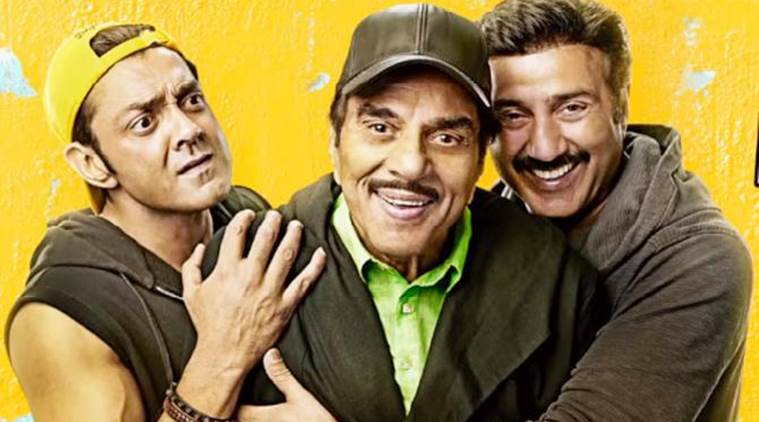 Yamla Pagla Deewana: Phir Se plays to the strengths of the actors whose careers it is trying to revive, but one only wishes the writing wasn’t so out of touch. Surely, the world of the Deols is a simpler one, one that isn’t ravaged by political correctness. One where decisions are taken from *points to dil*, and a place that presents plenty of opportunities for the Deol family to play messiah. The Deols save their pushto ki izzat, cure mohallawallahs, dance after slapping their thigh in pure pind fashion, drink to their heart’s content during a banal ‘party song’ that rhymes pee gaya with jee gaya. Nothing else matters.

Kriti Kharbanda plays the perfunctory Gujarati girl who mouths rebuttals like taari maa nu dhokla and downs vodka miniatures. This is her new-age rebellion to her Khakra/Undhiyu roots. She’s an ENT surgeon we’re told, and her only ‘function’ (in the film) is to rave about India’s ancient tradition of Ayurveda and tell Sunny Deol, he is right.

The film’s second half is drowned in clownish courtroom scenes – where allopathy is pitted as a cold, degenerate, corporate way of medication. While Ayurveda is the warm, cuddly medicine made using a Deol ka dil. There are intermittent mentions of tariq in the courtroom where the camera cuts to Sunny Deol, and the rest of the cast looks amused/pleased with the reference.

To call Yamla Pagla Deewana: Phir Se one of the most terrible films in this world would hardly be accurate – because it doesn’t look like it belongs to this world. This film is an achievement in the world of the Deols, one which celebrates and massages the ego of its lead trio and their imaginary careers. The next time Bobby Deol tells his sob story to a publication, maybe he ought to think about the films from his ‘second innings’ – Race 3, this mess, and it’s Housefull 4 after this.