Singer Sonu Nigam on Monday lashed out at “forced religiousness” in India after being woken up by the azaan from a nearby mosque, triggering a torrent of reaction for and against. His tweets gave the social media users a new topic to debate on. Not only the twitterati but people from the industry also expressed their views on the whole controversy.

After Pooja Bhatt, singer and music composer Wajid Khan also took to social media and shared his views on the same. Wajid wrote that he understands that everyone has their point of view, but the same can be done without hurting others sentiments. Here’s what he said: 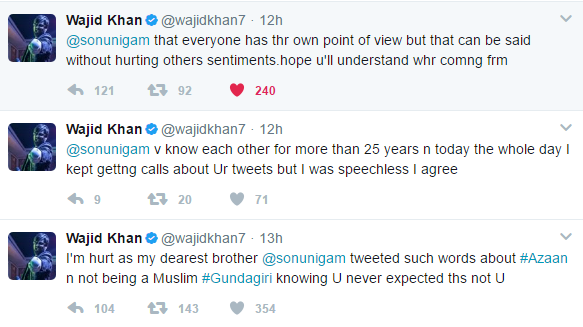 Reacting to his tweet, Sonu Nigam also took to his social media platform and replied: Dear @wajidkhan7. If for once u stop being a Muslim & simply be a Citizen of India, u will see what everyone is truly talking about. Love

Sonu landed into controversy as he started a debate with his series of tweets on loudspeakers and azaan. The Kal ho naa ho singer posted: God bless everyone. I’m not a Muslim and I have to be woken up by the azaan in the morning. When will this forced religiousness end in India?

Check out his other tweets as well

And by the way Mohammed did not have electricity when he made Islam.. Why do I have to have this cacophony after Edison?

I don’t believe in any temple or gurudwara using electricity To wake up people who don’t follow the religion . Why then..? Honest? True?

I wake each morning to the sound of church bells & the Azaan in a quiet by-lane of Bandra.I light an aggarbatti & salute the spirit of India

As Sonu’s views went viral, reactions poured in from everywhere around the world. While many criticized the singer for his insensitive post, others came out in his support. Actress Richa Chadha is among the few people from the industry who extended their support. Here’s what she wrote:

People will misunderstand your tweet n give it a communal tinge, only those who know you will know you mean not to stoke a fire.https://t.co/P8NvIQ4m4s

Also Read: Sonu Nigam stands by his statement, says it’s about loudspeakers and not azaan

Meanwhile, filmmaker Vivek Agnihotri also wrote in support of  Sonu and said that he will sponsor a campaign against illegal blaring of Azaan and other prayers on loudspeakers. Check out his tweets here:

I am willing to sponsor a campaign against illegal blaring of Azaan and other prayers on loudspeakers. Suggest a creative hashtag.

Please please stop this blaring Azaan. Please. What sense does it make? None cares about productivity in our country.