Singer Kailash Kher recently sparked a controversy with his comments on Sonakshi Sinha’s performance at the upcoming Justin Bieber’s show in India. In one of his interview, the Padma Shri winner singer said that getting the Dabangg actress on board to perform at Bieber’s maiden concert in the country over any other acclaimed Indian singer is not a good sign, and sends a wrong message internationally.

Clearly, this post of Kher didn’t go down well with Sonakshi Sinha and the actress too replied by saying: ”A secure artist would always encourage another artist to grow their skills and follow their dreams. Art in any form should not be suppressed.”

But the controversy turned huge when singer Armaan Malik came out in support of Kailash Kher. Malik, who has crooned songs like Sab tera, Wajah tum ho and Sau aasmaan, took to Twitter and wrote: “Agree with Kailash Kher sir! Actors are actors and singers are singers. Leave the stage and mic to us, that’s our playground, not yours.”

And this lead to a twitter war between Armaan and Sonakshi, clearly leaving the industry divided. Speculations were rife that the actress will perform as one of the opening acts at the highly anticipated gig, which will be held at the DY Patil Stadium in Mumbai on May 10.

But Sonakshi cleared the air for once and all about her sharing stage with the pop sensation. The actress took to twitter on Monday and wrote a detailed post saying that she is not performing at the concert. The actress captioned the image: Just chill chill… just chill 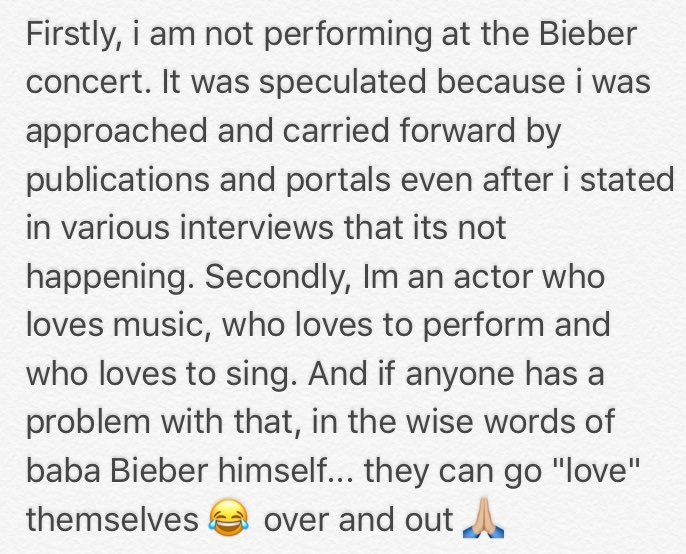 Well, now that Sonakshi has put an end to the conmtroversy with her tweet, we wonder how her critics will respond to it.