The trailer of Simran, featuring Kangana Ranaut is finally out. The trailer assures that we are going to get something fresh and fun to watch on screen this September. Directed by Hansal Mehta, the film shows a slice from the life of Praful Patel, played by Kangana, and her gambling addiction.

Going by the trailer, Kangana Ranaut again seems to have slipped into the character of a free-spirited woman. Right from the first scene, the trailer is accompanied by music interweaved with guitar and accordion. The trailer begins with Kangana saying: “isey imaratein rok nahi sakti, raaste baandh nahi sakte… ye hawa azaad hai (neither big buildings nor roads can come in its way, this air is free). As it progresses, it is established that Kangana’s character, Praful is divorced and has recently moved into a new house in the US, which is exactly what seems to bother her parents. In fact, her father is seen asking her in a scene “kyu chahye tumhe ghar… boyfriends ko bulane ke liye? (Why do you need a house, so that you can call your boyfriends over?)” But, Praful is a rebel and says “Yes” with a straight face.

It should also be noted there is no hint given about how Praful becomes Simran. Or does she even become Simran? What is the relevance of the title then? 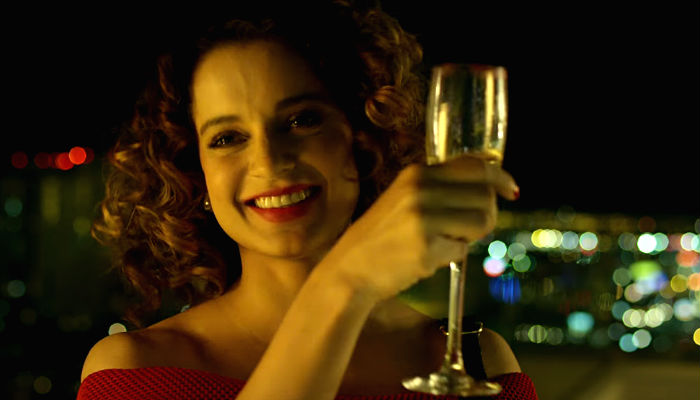 The trailer was launched at an event in Mumbai. At the event, Hansal said that he didn’t face a lot of issues in getting the producers on board for the film, unlike most of his other films which do not feature ‘stars.’ He said: “Having Kangana Ranaut absolutely helps in raising money for the film.” In fact, Kangana, who is known to be a free-spirited woman in real life also maintained that her journey to what she is today had been incredibly unusual or so would she like to believe.