Sidharth Malhotra’s tweet hoping people from Punjab, Haryana could watch his film A Gentleman, has been termed insensitive. The actor had put out the tweet before the big verdict on the Gurmeet Ram Rahim Singh case came. The self-proclaimed Godman was found guilty in a rape case by a CBI court in Panchkula on August 25. The quantum of his punishment will be decided on August 28. Much before the verdict came out, Sidharth hoped for peace in the states, something all of us want. But the next words which followed were- “Hope you see our film A Gentleman”.

Now, Twitter users were quick to point out the insensitivity of this, called Sidharth the winner of film promotions, and slammed him. To do damage control, Sidharth said later in a tweet that he had made this statement before the verdict. But that does not change anything. For days now, news has been covered with reports of how followers of Dera Sacha Sauda Chief thronged Panchkula to lend support to him. Haryana and Punjab have been tensed for days now. Amid this, did Sidharth really think anyone would care about his film?

A deeper look at this tweet and it boasts of a bigger problem. There are many similarities between Sidharth and the politicians who visited the Dera chief for votes. Haryana Chief Minister Manohar Lal Khattar had sought support from Gurmeet Ram Rahim Singh before elections. With his ‘blessings’, ML Khattar won the Haryana Legislative Assembly election in 2014 and became the CM of the state. But this is not the only example. In 2007, the Dera started a political affairs wing (PAW) to advise its followers whom to vote in elections. In 2007, the Dera asked the followers to vote for Congress in Punjab polls, though the party lost later. In 2014, the sect supported BJP in the general elections. In October 2014,  Prime Minister Narendra Modi had praised the Dera chief in a rally. 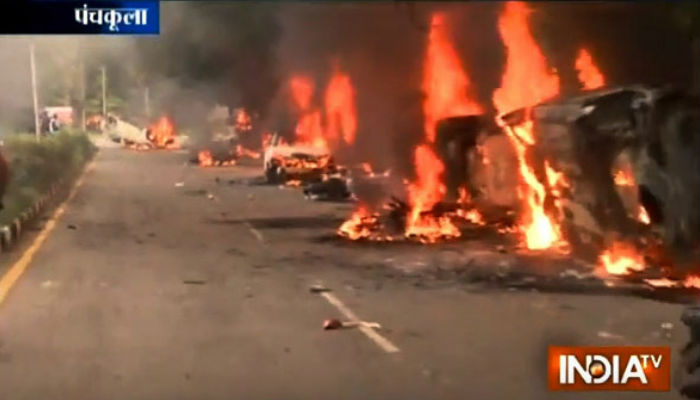 The Dera chief dabbling into vote bank and giving his opinion on politics is not new. This is probably one of the reasons why the ML Khattar run government failed to control violence which cost 31 lives. Once you seek benefits from a religious leader, keeping his followers at check after violence is not a cake walk for leaders.

While many of us have put the government under the scanner and called this a failure on its part, Sidharth Malhotra’s tweet doesn’t deserve a different treatment. When ministers care about votes, the actor too cared about Box Office. At the end,

it all comes down to numbers, be it votes or collection at ticket counters.

Check out his tweet and the reactions which followed:

To all the people of Haryana , please stay safe. Hope you can see our film soon #Agentleman #PeaceAndLove

I thought a couple of my tweets may have been a bit thoughtless when protestors started dying but this takes the bloody cake. https://t.co/DqW5nFT1Hv

R u really so stupid

This was a shameful way of promoting your film. For god sake can you get considerate

And here are the tweets which Sidharth wrote to do damage control:

Its really sad to see the situation worsen since morning and see people in Punjab and Haryana https://t.co/u8TeWwEaW0 and prayers.

To people who are commenting on my morning tweets,they were made before the verdict ! Thoughts n prayers

After the verdict came out many Bollywood celebs took to Twitter to share their views on it. Check them out here:

Scene outside every Godman's house. Such a shame. #RamRahimConvicted pic.twitter.com/hKuBw0EObJ

A big win for the people, especially the daughters of India #RamRahimVerdic
But can’t believe the poor measures that have been taken

201 trains n thousands of buses are in the parking in Punjab n Haryana just coz of #RamRahimVerdic! Who is responsible for all the loss?