What a whirlwind of a week it has been for Akshay Kumar. Being the subject of many memes, Kumar was forced to come out with a statement hinting at his Canadian citizenship, which has had everyone’s attention in this election season. In the statement, Kumar maintained that he worked in India and paid his taxes accordingly. Kumar signed off by saying, ‘I would like to contribute to the causes I believe in, and make India stronger and stronger.’ Kumar has kept his word by contributing Rs 1 crore to the victims of Cyclone Fani in Odisha. So now, should the questions around his contentious Indian citizenship stop?

After this seemingly ‘selfless act’, there’s a conversation to be had around Akshay Kumar having to prove his Indian-ness. Does it absolve him of misleading his fans about holding a Canadian passport, something he’s owned up to only a few days ago? It would be outright cynical to state that the only purpose of this donation is to deflect from the actor’s bad press in the last week. This isn’t the first ’cause’ that Akshay Kumar supports with such considerable monetary contributions. In a world where someone like Kumar could have done anything with his money, it reflects well for him to contribute such a large sum to those who need it.

Akshay Kumar’s citizenship is nobody’s business. But we need to look at the larger picture to understand why his ‘citizenship status’ is such a contentious issue. Kumar has starred in seven films in the past five years, where he has (even partially) championed the cause of nationalism, even winning a National Award for one of them. Akshay Kumar has even integrated nationalism in his brand endorsements, where he promotes a tile company by saying it’s been made from desh ki mitti (the country’s soil). Kumar has become the face of several PSAs – that highlight the ruling government’s campaign against open defecation and smoking. Labelled a sympathiser of the ruling government, Kumar even went on to interview PM Modi on several ‘non-political’ topics in the middle of the elections. 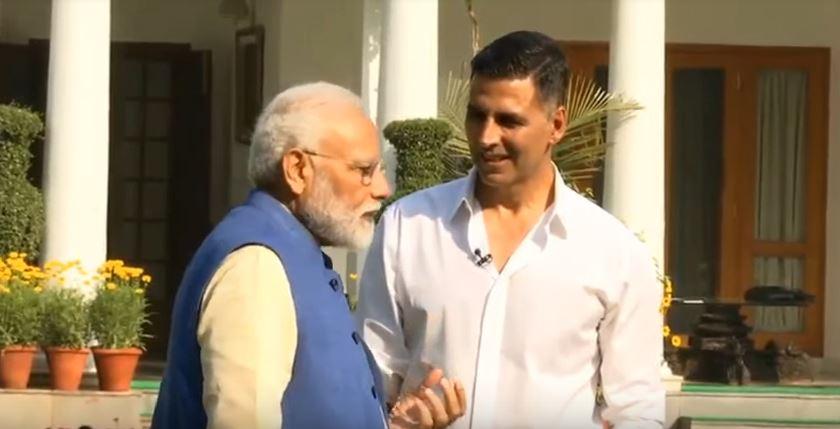 Offering his fame and celebrity on a plate to the ruling government for their perusal, Kumar proved he isn’t as ‘apolitical’ as he claims to be. This ‘interview’ sets a dangerous precedent in polarising times like these. Hence, it’s hardly a surprise that many Indian citizens are raising a question mark on Akshay Kumar’s ‘Indian-ness’.

But the question that has been raised is can someone who (apparently) isn’t even an Indian citizen, preach to us about nationalism or patriotism? And does the odd donation (which is obviously great PR) absolve him off the questions of a ‘responsible citizen’?

The truth is celebrities like Akshay Kumar can overturn public opinion, by being the good Samaritan ready with a cheque of Rs 1 crore in the aftermath of natural calamities like Cyclone Fani. And while we SHOULD laud them for stepping forward in the time of need, we shouldn’t stop ourselves from asking tough questions.